Not everybody is a natural-born scholar, but many law enforcement professionals recognize the value of higher education within the profession, as a second-career option and for personal satisfaction. In fact, according to the Police Foundation, approximately 30% of sworn personnel possess at least a four-year degree, and another 5% have earned a graduate degree.

Expanding one’s knowledge base, however, isn’t a choice made impulsively. Much thought and planning goes into the decision before entering any classroom, physical or virtual. What do you want to study? What school will you attend? How are you going to pay for it? How will you use the degree to advance your professional development?

Of course, the answers to these and other questions come down to individual choices, but it’s always helpful to see how others handled the process. Here, three FOP members share the lessons they learned both before and after returning to school.

When Jacob Morris decided to enroll in an undergraduate program with Ashland University, he’d already served in the military and logged several years on the job with the Lorain Police Department. Today, the Ohio FOP Lodge #3 member has also completed a master’s program from Bowling Green University, and still thinks about adding a Ph.D. to his educational résumé.

“I knew I wanted to return to school,” he says. “I started a degree program after leaving the military, but then was hired as a police officer and my schedule was not consistent. That was in 2004 before the online college programs were well known.

“When I did make the decision to go back, I had been out of school about 13 or 14 years. And honestly, I wasn’t a very good student when I was 18 or 19 years old. I never thought I could do it at this point of life: I was in the detective bureau, just bought a new house, and had a 6-year-old son and a wife.

“Ashland gave me an informational session on what to expect and I kept waiting for a reason not to go back, but I couldn’t ever find one. The more I learned about it, the more the hypothetical turned to a certainty, even with my busy life.

“I ended up with a 4.0 GPA for both Ashland and Bowling Green, and it was because I took school so seriously. As a working professional with personal pride that someone was going to read my writing with my name on it, I wanted an accurate representation of what I could do. But I found out I enjoyed the coursework and thought it was interesting.” 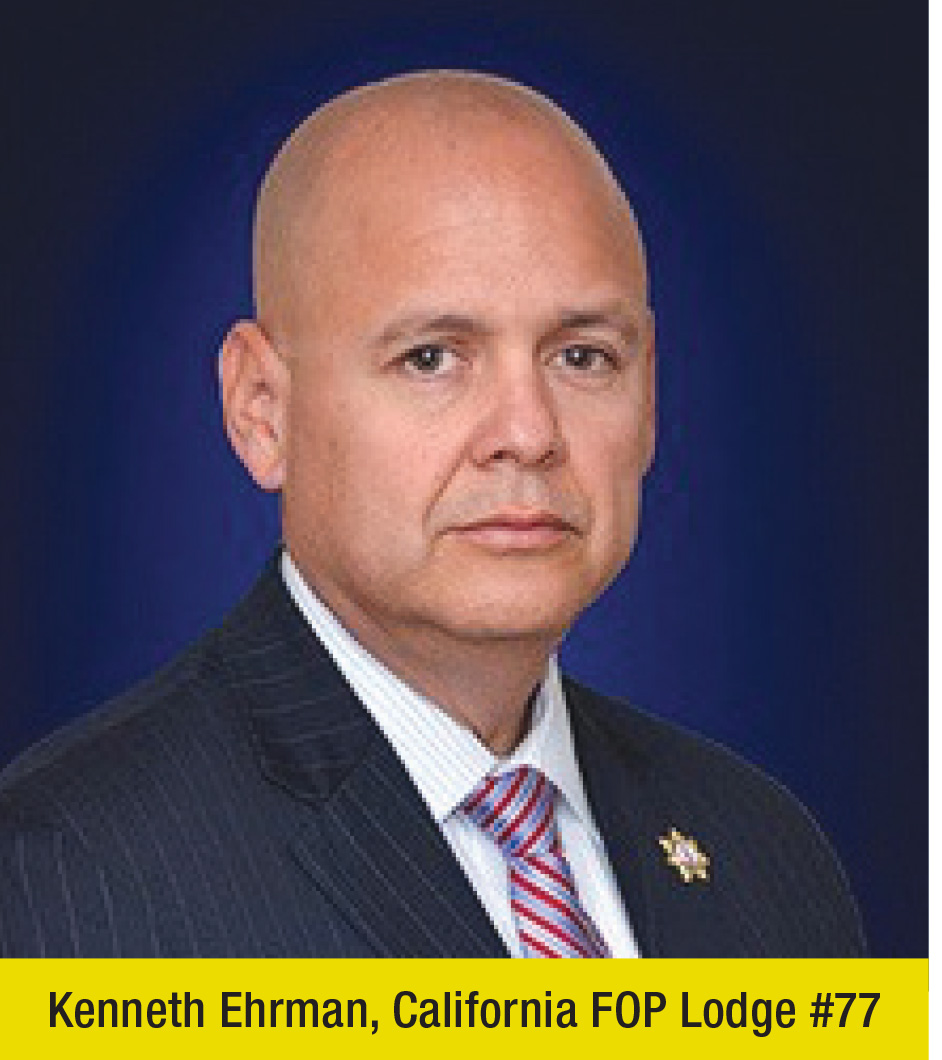 Kenneth Ehrman serves an investigator for the California Department of Motor Vehicles, as well as vice president for California FOP Lodge #77 in Sacramento and sergeant at arms for the California State Lodge. He received a master’s degree from the University of San Diego (USD) in 2017, and is currently pursuing a doctorate from California Baptist University.

“Enrolling at USD was my fourth try to return to school,” he says. “Because of the job, I never made headway. Then one day at a function someone said, ‘Hey, guys, did you hear USD has a law enforcement leadership master’s degree?’ I got on a laptop and started the application.

“Also, I had to come to a consensus with my wife, who is in law enforcement, too. I told her I felt like if I didn’t do it, I would regret it.

“I was part of the first cohort to go through the brand-new program at a top-ranked university geared toward management and leadership, not entry-level professionals. When I first looked at the program, I found the criteria was well defined. What they were looking for in applicants was well explained.

“Having my wife in law enforcement was a huge benefit for me because she was someone I could share information with. I find I’m more confident in my work product now. I’m more capable at writing. I’m much more prepared for dealing with the overall complexity of criminal justice issues.” 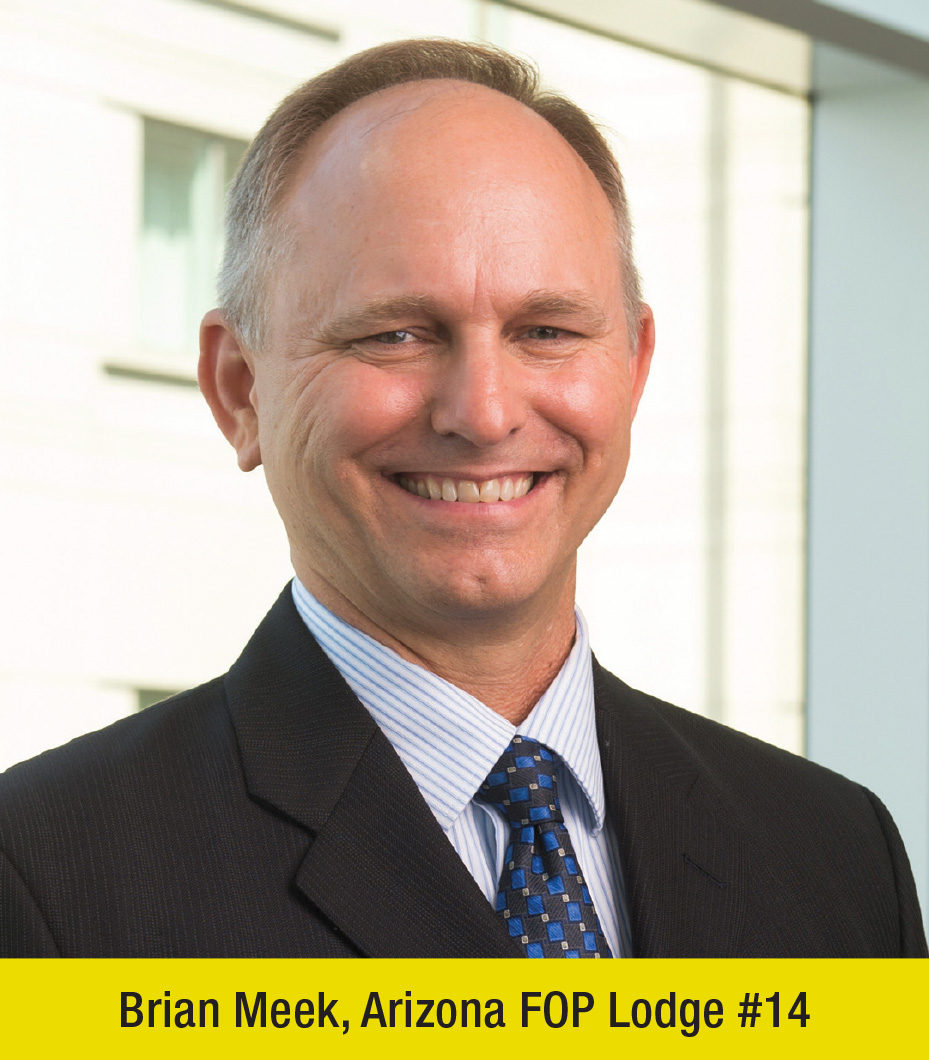 Brian Meek received a master’s degree in intelligence studies from the American Military University (AMU) while participating in the Phoenix Police Department’s preferred retirement option program and serving as a reserve officer. A member of Arizona FOP Lodge #14 in Chandler, he has set off on a second career as a diversion investigator with the U.S. Drug Enforcement Administration.

“I hadn’t thought too much about what retirement would look like,” he explains. “I started thinking about wanting something more than a security job. I wanted something dynamic and to enjoy what I would do next. Police officers don’t realize the skill set they have. They don’t appreciate how valuable their skill set translates to a secondary career. That’s what led me to the idea of a master’s degree.

“I was working a swing shift, from 1 or 2 p.m. to midnight, and if something happened, I could be there until 3 or 4 a.m., so it was hard to go to a traditional brick-and-mortar school working those hours.

“With AMU, there was no point in the week that you had to be online at a particular time. It was up to you when you go online. Also, the class is designed to force interaction with classmates. Not only did you put forth your own writings for critiques, but you had to comment on what other students posted, hence the class interaction. There would be back-and-forth exchanges.

“When it comes down at the end of the day, we usually have discretionary time. If it means that much to you, you’re going to make time. You’ll never regret getting the degree, but you might regret not doing it.”

See this story in the Winter 2019 FOP Journal issue.