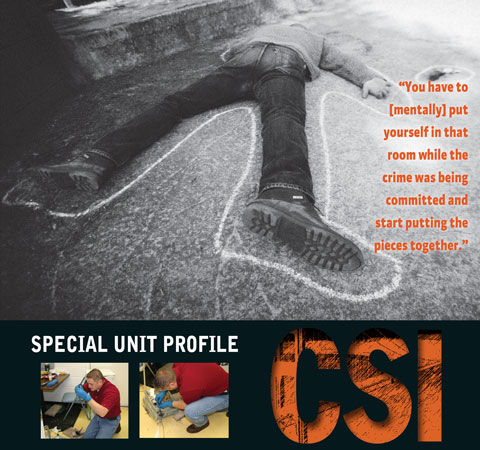 On TV and in movies, they’re adept at scouring locations for case-clinching evidence in minutes, but in real life, how do crime scene investigators (CSIs) process crime scenes? In this Special Unit Profile, two real-life CSIs and FOP members offer an in-depth look at their work and discuss their duties at the scene and in preparation for a trial.

Obviously, DNA can play a pivotal role in a murder investigation. And for Detective First Class Dale Trotter, FOP member and Crime Scene Investigator for the Worcester County Sheriff’s Office in Snow Hill, Maryland, DNA has proved invaluable, most notably in a nearly 20-year-old case that Trotter looked into in 2008.

“While inventorying property from a cold case in 1991, it was decided to re-submit the items to the Forensic Science Division for ‘up-to-date’ DNA testing … which resulted in the suspect being arrested and extradited from New York and later being found guilty. [It also] provided a life sentence for a crime that would have gone unsolved if it had not been for the good work by the investigators and crime scene techs that originally collected the items,” Trotter recounts.

Such is the norm for a crime scene investigator: handling even the smallest piece of evidence with great care because you never know exactly which item — big or small — will solve a case. More specifically, the job of a CSI is to process crime scenes for physical or testimonial evidence, according to the International Crime Scene Investigators Association.

It’s the tools that a CSI uses to process crime scenes that bring so many criminals to justice. We asked two top CSIs what their favorite tools are to use in the field. Trotter stuck with a simple but useful gadget: He claims as his favorite tool the Hot Shot Fingerprint Developer. Made up of a cylindrical container, packet of activator liquid, glue and heat canister, the Hot Shot, once  assembled, releases fumes that reveal fingerprints over the surface that you’re fuming, including small areas, rooms and vehicles. And while the Hot Shot is busy exposing fingerprints, Trotter can process other parts of a crime scene.

Corporal Jason Smith, Sergeant-At-Arms for the Oklahoma State Fraternal Order of Police and member of the Crime Scene Unit for the Jenks Police Department in Oklahoma, discloses that one of his favorite crime scene tools is an Alternative Light Source, or ALS. “It is a really cool tool that allows us to use alternative lighting, like a black light, to illuminate body fluids, bruising and other evidence usually undetectable by the naked eye,” says Smith. “Different filters are used for different applications, but it really aids us in finding hard-to-find biological and DNA evidence often looked over before we had it.”

Smith also relies on his fingerprint kit at crime scenes, but it’s a different kind than Trotter’s. Smith describes the “cool” parts of his fingerprint kit, which include the use of florescent, magnetic and other chemical print-development powders and products. “Although the fingerprints don’t jump out nearly as often as on TV, there is nothing better than lifting prints at the scene that link a suspect or suspects to the crime. I absolutely love sitting in the interview room while they lie about being at a certain place just before I lay the fingerprint lifts on the table in front of them and ask them to compare them to their own,” recounts Smith.

To read the full article, check out the Summer 2011 issue of the FOP Journal.

Are you part of a special unit? The 911Media editorial team wants to hear your story.