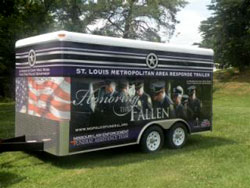 In Missouri, a team of officers has developed a resource to help departments and families suffering the loss of an officer.

Since the state of Missouri was established in 1821, it has suffered more than 630 line-of-duty deaths, many of them in recent years. When two policemen were murdered in the suburban St. Louis community of Kirkwood on February 7, 2008, a group of officers came together to begin creating the Missouri Law Enforcement Funeral Assistance Team. Over the last three years, these officers have devoted hundreds of hours to research and planning this new organization. They have assembled a Missouri-specific law enforcement funeral guide, put in place a structure to establish regional response groups within the state and developed training criteria for volunteers who will assist police departments and officers’ families through the aftermath of a line-of-duty death.

The team was established as a nonprofit, charitable organization. It operates under the guidance of a board of directors and appointed team leaders. The team receives no government funding, and all operations are funded through donations. The team charges nothing for its services.

The Missouri Law Enforcement Funeral Assistance Team responds only when the agency that sustained the loss requests help. The team serves in a behind-the-scenes capacity, offering suggestions based on the needs of the department and the fallen officer’s family. This includes providing personal support, as well as helping with the logistics and planning of the funeral. The team utilizes the incident command system and prepares incident action plans. A key strength of the team is its professionalism, tied in with a genuine dedication to properly honoring fallen officers.

The team can also assist fallen officers’ families in obtaining the benefits they are due. This effort is led by members of the Missouri Chapter of Concerns of Police Survivors who have been trained in completing the Public Safety Officers’ Benefits Program application process and actively work with the team.

Though not the original intent of the team, it now also helps plan and carry out services for active-duty officers who pass away while off duty, as well as for retired officers. Such was begun after team managers realized how important it was to properly honor those who have served their communities. Mike Wiegand, of the Eureka (Missouri) Police Department, who has been active in the team since its inception, said, “Retired officers and others who have served as law enforcement officers obviously have given a lot to their communities and deserve to be properly recognized for the many sacrifices they made throughout their lives. And to be honest, it is the right thing for their families as well. We need to take care of all police families, not just those officers who died in the line of duty.”

In 2010, the team deployed its first response trailer equipped with items to assist in carrying out appropriate memorial services, including casket flags, military service flags, Honor Guard supplies, mobile public address systems, mourning bands and so on. The team has developed a comprehensive list of supplies that might be needed for any type of service. In time, the team hopes to deploy five additional response trailers across the state. A fully equipped trailer costs nearly $25,000.

Initial steps have been undertaken to establish a response group in the Kansas City metropolitan area, as well as in Southwestern Missouri. The team’s long-term goal is to have six response groups with resource trailers across the state.

To date, the team has assisted with five line-of-duty-death funerals and over 50 funerals for retired officers and active-duty officers who passed away as a result of non-duty-related injuries or illnesses.

Early on, the team received the endorsement of the Eastern Missouri FOP Lodge 15 and the Missouri State Lodge of the Fraternal Order of Police.

Through memorandums of understanding, the team now also helps with funerals in Illinois and Kansas. The team has assisted with three funerals in each of those states.

Team leaders are hopeful that other statewide or regional teams will develop across the country, creating a network of organizations to assist with officer funerals. The team is willing to provide whatever guidance is needed to any organization, region or state wishing to create a team dedicated to honoring fallen officers and remembering those who served. The team is currently providing guidance to a group of officers seeking to create a team in the Phoenix (Arizona) area, helping several officers in Kansas create a standalone team in their state and working with a national law enforcement agency to create a response team within their organization.

Several other states also have resources to assist agencies when an officer is killed, including Indiana, Michigan, Washington and Wisconsin.

As law enforcement officers, we have to face the reality that anytime, anywhere, we can lose one of our own. The Missouri Law Enforcement Funeral Assistance Team is there as a resource to assist.

Scott Barthelmass serves as a Corporal with the Overland (Missouri) Police Department. He is a 17-year law enforcement veteran, long-time FOP member and founder of the Missouri Law Enforcement Funeral Assistance Team. Scott is active in numerous causes to promote officer safety and honor fallen officers. Scott may be reached via email at sbarthelmass@yahoo.com.