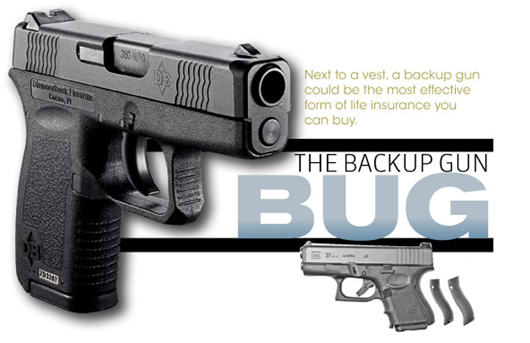 Arguments exist for and against packing a backup gun, or BUG, in addition to your daily carry firearm. Whenever the topic is broached, the old military adage “Two is one, and one is none” often dominates, as your primary sidearm could become lost, jammed or otherwise inaccessible when you most need it. In a situation where your primary weapon is no longer in play, the BUG — handy, lightweight and concealable — can be called upon to keep trouble at bay. However, they often come at a price: massive recoil and underwhelming sights. It’s up to you to decide if that price is worth paying for secondary insurance should your primary weapon fail.

Drawbacks to the Backup Gun
Though they are lightweight when compared with full-size handguns, most BUGs worth carrying will still add a pound or more to your rig, and you have to consider where you are going to carry it. Officers in plainclothes — on or off duty — already have to dress around one gun, but what about two? Ankle holsters are a popular option for secure, comfortable carry, and with practice, they are easy to draw from, especially when seated in a car. However, they are cumbersome in a foot chase, and there is a real concern as to how securely the gun will remain fastened in the event of a physical confrontation. Inside the waistband (IWB) holsters dominate with most who carry concealed, but when it comes to a BUG, two IWBs would be a tough sell for most. As a result, some officers simply settle for one gun.

A .45 Colt makes a great BUG, but even if you can justify its size, how can you carry it cocked and locked? Most any rig that would carry an SAO in cocked-and-locked readiness while concealed is likely to require two hands to bring it out of concealment and into action. Big calibers also require stiffer recoil springs, making it harder to chamber a round. This isn’t a problem when you are practicing at the range, but think about a scenario in which your strong hand is injured and you are loading and chambering weak-hand only. There are techniques, such as dragging the slide along your leg to accomplish this, but the tactics are only as good as the amount of practice.

Another factor to consider is space. Space on your Sam Browne duty belt is at a premium, and each item you carry should be absolutely essential and complement the other tools at the ready. If you have the ability to carry a second firearm, you might be better off carrying something else in its place, perhaps another piece of equipment such as a personal first aid kit, flashlight, nonlethal weapon or a knife designed to safely cut a seatbelt and extricate a victim in a traffic crash. These options should be weighed carefully before adding a BUG to your list of essentials.

The backup gun is meant as just that — a backup, secondary line of defense — and as such, many manufacturers do not even bother with sophisticated sighting arrangements. These guns are strictly point-and-shoot propositions. This is not necessarily a deal-breaker, however, as statistics show that it is unlikely an officer will ever have to fire his primary weapon, much less his backup gun. Recoil is definitely something to consider with a BUG, as the whole idea of an easy-to-carry, concealable firearm depends on its small size and light weight. With their snubbie barrels, recoil has no place to go but into your arms, and your ability to practice shooting to maintain this recoil will determine your BUG’s efficiency and effectiveness in a defensive scenario.

Benefits of the BUG
A backup gun is a cheap, effective piece of life insurance. If your primary weapon fails — and Murphy’s Law says it will at the worst possible moment — you can go to your backup to neutralize the threat. When under pressure and in certain situations, the fastest reload may in fact be going to your backup gun rather than reloading with magazines or taking time to troubleshoot a jam. A BUG can be easier to access if you’re injured, once a fight has gone to the ground or in other awkward positions. Its handiness cannot be overemphasized.

Unfortunately, IWB holsters can make it hard to easily access your primary weapon while lying on your strong side or, for right-handers, from the passenger seat of a car. (Lefties, of course, have the same difficulty on the driver’s side.) If you cannot access your primary sidearm quickly enough, a backup gun in an ankle holster can easily be accessed and addressed to the threat. Here’s another scenario: You could get in an extreme situation where you find it necessary to pass your BUG on to an unarmed loved one or civilian. This may seem unlikely, but if you are wounded, pinned down and taking fire, having two defenders — you plus your spouse or friend — could mean the difference between life and death. After all, two armed “victims” are a lot more intimidating than just one.

Selecting a BUG
Once someone draws a gun on you, it is no longer a debate; it’s a gunfight. The rest of the world, politics, family drama and religious beliefs mean nothing. Your brain freezes from the adrenaline it just got blindsided with, causing tunnel vision — most likely focused on the barrel of the gun pointed at you and not center mass. Your training is likely to be thrown out the window. You’ll shoot until the slide locks back or you hit the third empty chamber of the cylinder. And then you’ll need a backup.

Choosing your backup gun is a personal choice, and once you have made the decision to carry one, you must consider the best place to carry it on your person, as well as the caliber that most suits your needs and preference.

Where to locate your BUG will in large part be dictated by your uniform, street clothes and whether you are on or off duty. If you are wearing your uniform on duty, you’ll carry your backup differently than if you are driving an ATV on beach patrol, or a detective working homicide in a suit versus an officer assigned to an auto theft prevention. When off duty in a plaid flannel shirt and jeans, you have more options for carrying a BUG than you do when wearing a polo shirt and shorts. Determine which scenarios you will most likely carry a BUG, then assess your clothing/uniform for carry that offers optimum concealability, accessibility and security.

Of course, your department may have specific requirements as to caliber, safety features and length, taking many popular BUG choices off the table. As to caliber choice, some have a penchant for the biggest pellet they can push out the spout and still control the recoil. That being said, there are some big, tough guys who declared that .22s were “wimpy little mosquito guns,” but none of them would be willing to stand still if one was pointed at them. Caliber choice should fit your personal comfort level, or you will not put in the practice necessary to control your backup gun. Some people choose to carry a second service gun as a BUG or a compact version of their service gun that accepts the same magazine. While this provides familiarity and continuity between your carry arms, the problem is one of size. Most compact service handguns are still too large to carry in a deep concealment capacity.

Accuracy is another factor. On one hand, a BUG is most likely to be employed at point-blank range when you are in survival mode, shoving it at an assailant and pulling the trigger. In a situation such as this, sights are not a necessity. A small revolver, or even a derringer without sights, could fill the bill. In today’s market, it wouldn’t be hard to find a derringer to match your service caliber, either.

The problem arises when you have to go to your BUG and the threat isn’t within arm’s reach. Small handguns are notoriously hard to shoot accurately. While backup guns are highly concealable, are you going to bet your life that you can make the shot? Further, can you qualify at the range, putting five shots in a 10-inch circle in three seconds with a two-shot derringer? The good news is that many mosquito guns these days can be retrofitted with laser sights and in many cases may be offered with an incorporated laser system from the manufacturer.

Popular in many departments as backup guns are small revolvers in medium calibers holding five or six shots. The majority of these are hammerless to prevent snagging on loose clothing or a pocket. Titanium and Scandium revolvers will save a few ounces, with offerings down in the 12-ounce range, making carry easier (especially in an ankle holster on a foot pursuit), but they are a bear to shoot. There are simply no free lunches here. Selecting a light frame in a medium to large caliber is going to result in more than noticeable recoil, but if you practice at the range, these guns are an effective option.

Parting Shot
In the end, the question of whether to carry a BUG is answered simply: Yes, you need to. The question of which BUG is best is more difficult to answer. Put two of your buddies in a room, and you’re sure to get at least three different opinions on which backup gun is best for you. Before selecting a BUG, sit down and game out the selection criteria, matching your particular situation, department regulations (CCW laws), physical size (large/small frame and hands), clothing/uniform most often worn and personal preferences as to caliber and class (semiauto/revolver) to the gun that best fits your needs. There is a backup gun for everyone, and one can never have too many options, especially when “one gun is none.”