Law enforcement, military and other agencies are always on the prowl for devices that will help them gain the upper hand. Although weapons often are the primary focus of such groups, there is also a growing interest in non-lethal weapons. Many times these devices are referred to as non-lethal weapons, but many experts express a concern over such a phrase since, technically, a standard No. 2 pencil can be lethal if used in an improper way. The more acceptable term would be “less-than-lethal devices.” Even though the terminology may be up for debate, it is hard to argue that the popularity of these types of devices is on the rise. 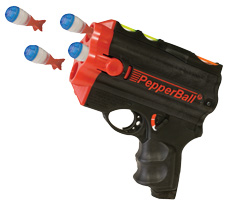 Sergeant Pepper
The PepperBall SA-4 Launcher is a lightweight, highly effective device ideal for dealing with non-compliant individuals. It measures 6-by-6 inches and weighs less than 14 ounces when fully loaded with a 9V battery and projectiles. Its specially designed projectiles are packed with irritant powder containing 5% capsaicin II PAVA pepper powder — 15 times more potent than standard hot pepper. The SA-4 Launcher is easy and accurate to use thanks to the Hi Viz laser sight. The unit offers users three different user modes — safe, stealth-on and laser-on — and has an effective target range of out to 30 feet. PepperBall also featuers non-pepper training rounds loaded with scented powder and clearly marked in a red, white and blue container.

High Risk Gear
When a diversion device is called for, the Combined Systems Flash Bang devices are an excellent option. The Tactical Mini Bang system is the perfect choice when you need to cause a diversion during high-risk civil disorder, at a hostage rescue or while serving dangerous warrants. The Mini Bang weighs less than 20 ounces and is smaller than 6 inches in length, making it convenient to carry in a pocket, bag or on a duty-belt. The Mini Bang works by providing two different distractions: a bright light of 8-12 million candelas and an ear popping sound output of 175 decibals at 5 feet. The Mini Bang also houses a single-use ATF controlled Class-C explosive. 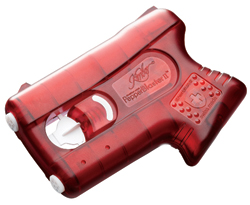 Liquid Fury
Kimber has a reputation for its standards of excellence and quality products. That same attention to detail has been applied to the Kimber PepperBlaster II thanks to its painfully hot pepper ball of liquid fury, which is dispersed out to 13 feet at 90 mph — leaving the attacker disabled for up to 45 minutes. Two highly concentrated pepper solution charges give you two shots. Since it isn’t pressurized like an aerosol spray, it doesn’t lose pressure over time, and it’s three times as effective as other units on the market. Plus, the ergonomically designed unit fits easily into a pocket or purse.

Easy to Carry
ASP Personal Safety Defenders are two of the smallest aerosols on the market. ASP offers two different sizes: the Key Defender with a length of 5.75 inches and the smaller Palm Defender with a length of 4.5 inches. Both of these units pack a powerful punch. What makes the ASP Defender series different is that both of these units offer training cartridges. Constructed of a high-grade machined aluminum body, solid brass actuator and split rings, this less-than-lethal device easily attaches to a key chain or purse strap, fits into a pocket or tucks into a vehicle sun visor. The device requires two distinct movements to deploy the spray, and ensuring the end result is a low-profile, devastatingly effective aerosol dispenser. 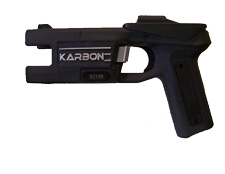 Strong Stun Gun
If you are looking for a reasonably priced multi-purpose immobilization device, then the Karbon Arms MPID is what you want. Karbon Arms is a leader in products for the law enforcement community with one simple goal in mind: Deliver quality products that help professionals do their job more efficiently. The MPID (Multi-Purpose Immobilization Device) is built on a solid frame, making it nearly indestructible. It also offers an integrated cartridge ejection system and operates with standard batteries. One of the popular features of the MPID is the recessed cartridge that prevents accidental misfires. 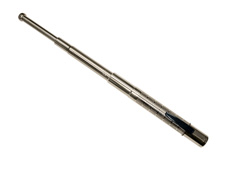 Devastatingly Discreet
SP’s (Armament Systems and Procedures) new Agent Baton is small, lightweight, easy to grip, discreet and extremely effective. Made from aluminum and high grade carbon steel, this baton has a striking surface rating of 240,000 PSI tensile strength, which in layman’s terms translates into a devastatingly low profile baton that packs a punch. When fully retracted, the baton measures 7.75 inches but rapidly extends to become a 16-inch LeverLoc less-than-lethal device. It also comes with a snap lock clip, which enables it to be carried in a range of positions. Because the ASP Agent Baton is lightweight and small, it is easily hidden in a pocket or waistband making it an ideal “off-duty” baton.

Professional Grade
The Taser X26 ECD is a law enforcement—grade laser gun that uses replaceable cartridges containing compressed nitrogen capable of firing two small probes attached to insulated conductive wires. These wires have a range of approximately 15 feet and are capable of penetrating up to 2 inches of clothing, which can seriously incapacitate the attacker. The X26 model works as a direct contact stun gun. The X26 comes equipped with a digital power magazine battery pack plus a battery memory indicator and an anti-felon identification feature. Most states allow legal carry of the Taser, but it is advised you check your local regulations regarding any less-than-lethal devices.

Reliability
FNH 303 Standard Launcher is a device designed to provide maximum effectiveness with minimum risk. With a barrel length of 10 inches and overall weight of 8 pounds, the 303 Launcher is reliable and highly effective. Constructed of rugged polymer, the FN 303 is a .68 caliber launcher with a range of 50 meters which shoots fin-stabilized rubber projectiles. It comes standard with flip-up iron sights or you can easily add your own optics on the top mount rail system. Additional quality features on this device are a manual safety lever inside the trigger guard and a braided steel air supply line. The FN 303 Launcher shoots approximately 110 shots per from its air bottle that provide 3000 PSI of compressed air. 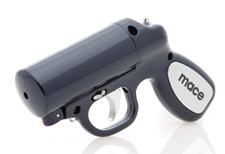 Gun with a Bite
If you are seeking a pepper spray device that can offer an accurate extended range, a powerful LED light and a bonus feature of intimidation thanks to its pistol-like appearance, then consider the Mace Pepper Gun. The Mace Pepper Gun dishes out a serious dose of painful OC pepper spray and is greatly effective thanks to the bag-in-the-can delivery system technology. Plus the trigger activated LED light is bright enough to disorient any would-be attacker. Each gun comes with a 28-gram cartridge of OC pepper spray, a water practice cartridge and batteries to operate the LED light. Weighing less than 2 pounds, the Mace Pepper Gun is a great option for a less-than-lethal form of protection.

Scare Tactic
The Sabre 500,000 volt Stun Baton measures 13 ¼ inches tall and offers a less-than-lethal, yet painful dose of electrical current. If the visual intimidation caused by the electrical current that flows from probe to probe is not enough of a deterrent, then perhaps the thunderous noise created from those same currents will issue a serious scare tactic to anyone foolish enough to challenge someone holding a Stun Baton. The baton does require a direct contact to the attacker’s torso area, but provides users with an on/off safety switch and separate activation trigger mechanism, operates on two 9V batteries and is equipped with a wrist strap and belt holsters and a two-year warranty.

Revolutionary
The Aegis Industries radical new less-than-lethal device, the MK63 Trident, is designed with the intended purpose to give the user several different self-defense options within one package. The Trident offers users an electronic restraint device, an impact device much like a baton and an OC pepper spray device all in one easy-to-use piece of equipment that is safe and effective. The thumb activated handle will disperse OC pepper spray out to 25 feet, and if that isn’t enough, the Trident has a built-in electronic restraint device that works much like a stun gun. This device also incorporates an LED light with a blinding output of 320 lumens and has an optional laser or white light option.