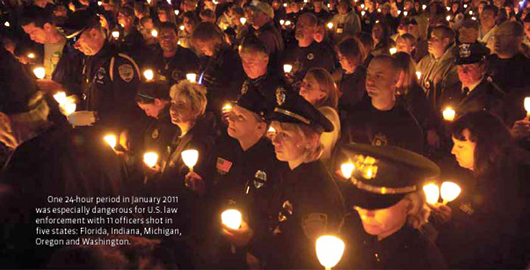 As the Fraternal Order of Police and the National Law Enforcement Officers Memorial Fund put finishing touches on events for Police Memorial Week, May 12-16 in Washington D.C., thoughts can’t help but turn to those officers who paid the supreme sacrifice while in service to their communities and the families who mourn their loss.

It is especially disconcerting in a year that has seen more local and state governments threatening to cut back on benefits to law enforcement officers. The alarming rise in line-of-duty deaths in 2010 is frightening. But the rise has continued into the first quarter of 2011.

As of January 24, 2011, 14 law enforcement officer fatalities had been recorded across eight states, with multiple deaths in Florida (5), Texas (2) and Ohio (2). Florida and Texas were among the top five states leading officer deaths in 2010 (along with California, Illinois and Georgia).

“The devastating spike in law enforcement officer fatalities in 2010 has tragically continued in the first month of 2011,” says National Law Enforcement Officers Memorial Fund Chairman and CEO Craig W. Floyd. “I have never seen anything like it. The violent events of the past 24 hours in Florida, Michigan, Indiana, Oregon and Washington have been detrimental to America’s peace officers, taking the lives of two and injuring several others. We must do everything in our power to stop these senseless and heinous crimes against our law enforcement personnel.”

On Monday, January 24, three officers were shot — two fatally wounded and one injured — while serving an aggravated battery warrant at a home in St. Petersburg, Florida. Just the day before, on Sunday, January 23, four officers were shot at a Detroit police precinct. Two Kitsap County, Washington, Sheriff’s Deputies were shot at a Wal-Mart while responding to a call reporting a suspicious person, and police officers in both Indianapolis and Lincoln City, Oregon, were critically injured in shootings during traffic stops.

According to the National Law Enforcement Officers Memorial Fund’s preliminary 2010 End of Year Officer Fatality Report, officer fatalities reached 162, up nearly 40% from 117 in 2009. Of the 162 officers killed in the line of duty, 61 were shot — a 24% increase from 2009. Tragically, the trend continued with 14 officer deaths in the first month of the New Year, 10 of which resulted from shootings, accounting for a significant increase compared to the same time in 2010.

“As recent events show us, there is a more brazen criminal prowling the streets of America and our law enforcement officers — those responsible for protecting our communities — are uniformed targets for these criminals,” Floyd says.

A significant portion of this article was contributed by Steve Groeninger with the National Law Enforcement Officers Memorial Foundation and written with information taken from the NLEOMF website, www.nleomf.org.