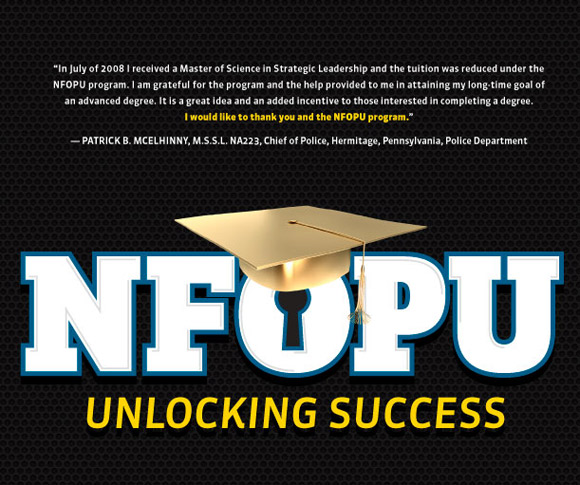 Then there are those law enforcement officers who are nearing retirement or have retired, only to realize they still have many years of active living ahead of them and want to train in another field or teach law enforcement rookies what they’ve learned.

So what does a law enforcement officer who wants to pursue higher education do? Most working cops have varied schedules, making attending classes on a campus during the day difficult. Work schedules, home life and school, along with FOP lodge activities and other responsibilities, make going through a standard degree program virtually impossible.

In 2007, the National FOP formed a partnership with nine universities that have online degree programs, are regionally accredited and are willing to offer some type of extra benefit to FOP members to make their dream of a college degree a reality. As a result, the National Fraternal Order of Police University (NFOPU) was formed. And four years later, well over 200 FOP members are currently engaged in a degree program at one of these schools, most being able to get tuition scholarships and class credit for work experience. Add to that liberal credit for academy — both police and FBI — training, and their matriculation through the degree program becomes shorter as well.

To date, the NFOPU has produced 18 graduates (that the National Lodge is aware of). Of those 18, half have received master’s degrees ranging from criminal justice to strategic leadership to forensic sciences. Of those receiving bachelor’s degrees, even National FOP Secretary Patrick Yoes took advantage of the program. “Not unlike many officers today, I started college but the twist and turns of a cop’s life often caused me to put the completion of my degree on the back burner. This program took away every excuse I had for not finishing my degree,” Yoes said.
While a staff member at the FOP National Office acts as a liaison between the schools and the students, the schools really do all the work, and FOP members will need to contact the schools directly to apply for admission. The FOP website features a section on NFOPU and lists all the schools with links directly to their websites (see sidebar). And once an FOP member graduates with their degree, if they contact the NFOPU liaison a NFOPU diploma is awarded to that graduate as well.

Graduates of the NFOPU program have reported getting job promotions as well as being able to move into other fields of work. Several are now teaching at the university level in criminal justice fields, using both their own work experience and their education through one of these online universities to start a whole new career experience.

As Secretary Yoes and others have said, no more excuses. NFOPU offers FOP members a way to the door of success — all they need to do is turn the key.