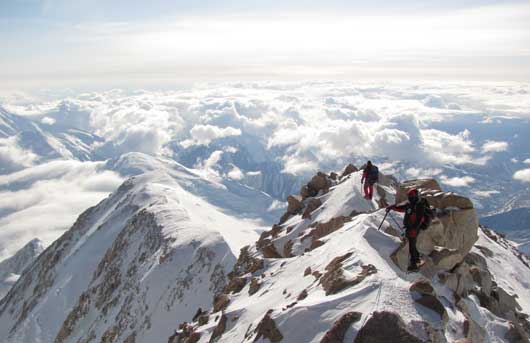 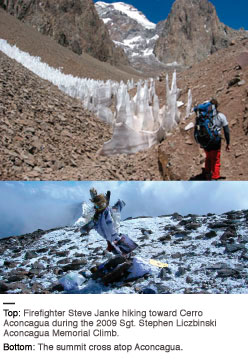 Cerro Aconcagua, the 22,834-foot mountain that straddles the border of Argentina and Chile, rose before the climbers on a warm January morning in 2009. Would they be able to make the summit? Did they have the strength, the stamina to make the ascent? Would the weather cooperate? Even though it was summertime in Argentina and the temperature was climbing into the 90s on the ground, the climbers knew that as they ascended the temperature would drop and snow and ice would blow, and the conditions could get hazardous.

But the three men and one woman on this expedition had a special mission. They hadn’t traveled to Aconcagua to climb the mountain just because it was there, as mountaineer George Mallory once said. These four are law enforcement officers and were there to climb Aconcagua in memory of a fellow officer, Sergeant Stephen Liczbinski, who had been killed in the line of duty on May 3, 2008.

Lieutenant Troy Bacon and Officer Adam Noether had additional reasons for honoring Sergeant Liczbinski with this arduous climb — all three officers have been members of the Fraternal Order of Police for many years, and Bacon and Noether, members of FOP Lodge 69 in Frankfort, Indiana, knew that not only were they honoring a brother in arms, they were also honoring Liczbinski, who had been a member of Philadelphia Lodge 5 since 1997, as a fellow brother in this important fraternity of cops.

Bacon and Noether, along with the other expedition team members, are members of Cops on Top, an organization of law enforcement officers who execute mountain-climbing expeditions to honor their fallen comrades killed in the line of duty. And each year, since 1999, these intrepid officers conquer peak after peak to offer a special remembrance and their condolences to the families of the fallen.

Originally the brainchild of Captain Keith McPheeters of New Mexico’s Farmington Police Department in 1999, it wasn’t long before word spread about this unique sort of living memorial and Cops on Top was born.

Trooper Stu Frink of the Washington State Police, co-founder of the organization, remembers reading about McPheeter’s efforts, motivating him to get in touch and get involved. “I read a magazine article about Keith in a magazine called Concerns of Police Survivors. My brother was killed in the line of duty in ’93 and I was currently a law enforcement officer. I was with the same department, State Patrol. I was just thumbing through it one night and there was a picture of Keith. I said, ‘I’m going to get a hold of him and talk with him and see what we can do. I’d love to do something like that.'”

What began as a small, grass-roots effort has spun into something much greater, but Frink still recalls that first climb he made with McPheeters and several others many years ago, noting how the organization has evolved.

“We were up in Wyoming to do Gannett Peak,” he says. “We weren’t able to do it because of weather conditions. We had originally planned to go to Grand Teton, which isn’t too far from [Gannett], and we were successful [there]. That was my first successful climb with Keith and the team. So it was really small efforts as far as organizing to then be able to go to places like Argentina to climb Aconcagua and Kilimanjaro in Africa. We went to Russia. Those are larger endeavors coming from just a couple of guys getting together to do a good, smaller climb.”

Currently, Cops on Top holds two national events annually, the biggest being the Summit for Heroes memorial climb which is typically held on the last Saturday in June and encourages participants to climb the highest point in their state to honor the law enforcement officers killed in that state. Of course, depending on your geographic location in the country this can either be an easy feat or an extremely challenging one, but the reason behind it is the same — to inspire unity among the law enforcement community and respect for those who have sacrificed their lives.

Similarly, the second yearly event, which is always held on September 11, also asks members to climb to their states’ highpoints and remembers both fallen officers and those killed during the horrific terrorist attacks on 9/11.

Major expeditions, like Frink’s aforementioned Aconcagua climb and the 2010 Denali Memorial Expedition that the group completed, are planned when funds are available and a proper team can be formed. Since large-scale expeditions like these can require participants to be gone for a month at a time, there is a greater commitment involved that can often be difficult to achieve. 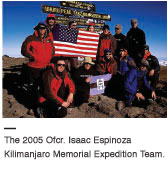 Bacon acted as the expedition leader on the last two major climbs and looks back particularly fondly on the 2010 excursion to Denali.

“So far, the best memory I have with Cops on Top was during the 2010 Denali Memorial Expedition in honor of Trooper Michael Haynes of the Montana Highway Patrol,” says Bacon. “The last few steps towards Denali’s 20,320-foot, bitterly cold summit were so emotional. I have to say, after I reached the summit and hugged my friend Steve Janke, tears began to flow down my face. At that moment I knew the team had accomplished something great. I knew that Trooper Haynes was smiling at us from heaven.”

While Frink has a harder time pinning down his favorite climb, he does offer up some of the most rewarding aspects of working with an organization like Cops on Top. 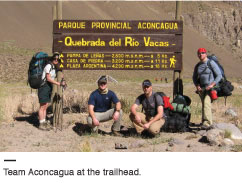 “First and foremost is being able to show our support for the families and other survivors,” he says. “I can kind of relate to that in a particular way because of my own background. We give back to them with an experience that they can have knowing that someone is putting in a great deal of effort, time and, many times, money as well to try to honor their loved one, their officer. I’ve been in their shoes, and still am in many regards. Also, being able to work with Keith and Troy and others we’ve climbed with over the years who have been involved with Cops on Top — it really creates a bond amongst ourselves. I can talk to guys like Keith and Troy and it wouldn’t be like we haven’t seen each other in six months or a year or even more than that. Once you’ve been on a mountain and been on a rope with someone it really creates a bond, which in some ways is kind of similar to what you see in law enforcement itself — the bond of the badge in what you do.”

Planning these expeditions can be a huge undertaking. Bacon explains that members can submit major expedition proposals to the Cops on Top board of directors. The board then reviews the proposal and decides whether to accept or reject it. As far as deciding who a specific climb will be dedicated to, the board will announce an expedition, then take nominations from across the country.

“Usually, the nominations include a photo, brief history of events and a personal explanation as to why that particular officer should be nominated,” says Bacon. “After careful and thoughtful deliberation, the board chooses an officer. However, before the expedition can be officially dedicated to an officer, the organization must get approval from the victim officer’s family as well as their department.”

When they do reach out to the families, generally the response is tremendous, with the relatives in disbelief that the organization would do something so selfless for them.

“It’s emotional because it brings back memories from what happened,” says Frink. “It’s not one of those memorials that’s a rock somewhere or a plaque on a wall; this is really a living memorial that we do while we’re climbing. Sometimes we’re taking family mementos that they give us, whether it’s a letter from a spouse or parent or drawings from the officer’s child. Sometimes those are things that we don’t open up. They hand them to us and they want them left closed. We might bury them somewhere on the summit, or we’ll bring them back down to the families so that the families can have that as a memento as well. We do provide a plaque and as many photos as we have. As much as possible we make contact with them after we climb and sit down and talk with them and share our experience on the mountain. They get to kind of vicariously climb the mountain with us.”

Several years ago the team was able to secure a sponsor for the use of satellite phones during their expeditions. This allows them to provide updates on their progress and the conditions in an effort to alleviate any worries on the part of the officer’s family, as well as their own loved ones, while scaling such remote areas. Fortunately, the group has been pretty successful in avoiding bad incidents, Frink notes.

Bacon is touched by how many people care so deeply about honoring fallen officers who have given so much to their communities.

“I have learned that people, not just officers, truly care about remembering the sacrifices of our fallen heroes,” he says. “Cops on Top is not just for police officers; it’s for anyone who wants to share in our goal of never forgetting. I have also learned that lasting friendships can be formed through tragedy. Through Cops on Top I have come to know so many officers and police survivors that I cherish and hold dear to my heart.”

In the 2009 climb of Aconcagua, Bacon, Noether, Steve Janke and Carmen Kinch struggled to the summit in worsening weather conditions and extreme cold that left them all exhausted, numb beyond belief and suffering the effects of altitude sickness and lack of oxygen. Steve Janke, on behalf of the whole team, finally made it to the summit on January 25, 2009, and planted a small plaque in honor of Sergeant Liczbinski. Bacon reported, “Steve reached the summit by himself … no other climbers were on the mountain at that time. Surrounded by clouds and heaven, he had time to reflect on the life, memory and sacrifice of Sergeant Liczbinski. I could see in Steve’s eyes and by the tone of his voice that he was grateful to have made it safely to the summit and down in honor of Sergeant Liczbinski. I can remember Steve later saying, ‘We made it to the summit. We did it!'”

For the immediate future, Cops on Top will continue to hold its annual climbing events, with the next Summit for Heroes taking place on June 25, 2011. Long term, Bacon has his sights set on reaching higher peaks.

“I would like to see a Cops on Top team on the summit of Mount Everest in honor of a fallen officer,” he says. “Currently, given the tremendous expense of such a climb, it’s not within the organization’s budget. With that said, however, the interest, experience and desire [are there].”