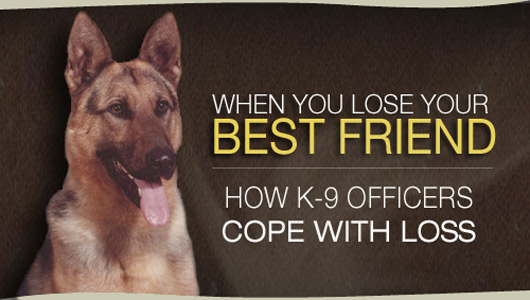 Retired Nashville Police Officer Allen Herald was best friends with his partner. The pair went everywhere together: service calls, meetings, youth camps, parades — you name it, and you could count on Officer Herald and his partner to be there. The duo even went home together, ate together and played together. 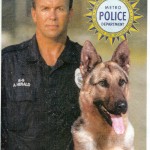 Herald’s German Shepherd Ingo was like family. Actually, to Herald, Ingo was family. “I worked with him for four years, eight hours a day. We worked the night shift so when we came home my wife was gone. I saw him more than I did my wife. He was part of me,” says Herald, a member of FOP Tennessee Lodge #5.

In 1982, Herald bought Ingo when the dog was just 10 weeks old. When Ingo turned 10 months old, Herald requested a transfer to the K-9 Unit and asked if he could bring his own dog, which is something many departments don’t allow, even today. Ingo passed the rigorous testing with flying colors, and soon Herald and Ingo were hitting the streets.

Ingo was trained in bite work, tracking, agility, obedience, search work and explosive detection. He was precocious and full of energy, but friendly. “I could take him around people and you could pet him, love on him, do whatever you wanted to do with him,” says Herald.

But once Herald voiced a command, Ingo would jump into action. In the four years Herald partnered with Ingo, the dog racked up several awards (some national), including tracking and locating a rape suspect.

“Ingo is special,” says Herald. “He wasn’t a dog, he was a partner. If you’ve never worked K-9, you’ll never understand. Unless you’ve been out there 14 weeks going through training when it’s raining, snowing or burning up, you can’t comprehend the bond you make.”

That’s why what happened on December 4, 1986, still haunts Herald to this day. A man had just robbed a bank, shot a responding detective (wounded in the knee) and kidnapped a man he then forced to drive to an apartment complex. There, the suspect fled on foot and was loose somewhere within the complex when Herald and Ingo were called in. Herald and Ingo were tracking the suspect in a stairwell; Ingo went first, Herald holding his lead. As the pair rounded a corner, Herald and Ingo came face to face with the suspect — who was still armed.

“He had the gun aimed right at me,” recalls Herald. By the time Herald fell back, frantically trying to pull out his own weapon and shorten Ingo’s lead, the K-9 had lunged. “He’s out of my hands, diving at the guy,” says Herald. The suspect got off one shot; a blow to Ingo’s head. 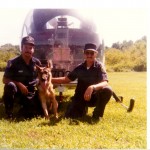 Herald recovered and returned fire, getting off three rounds and incapacitating the suspect. But Herald didn’t stick around as the other officers secured the suspect. Instead, Herald scooped his partner into his arms, carried him down the stairs and into the backseat of a waiting patrol car and held Ingo tight as they sped toward the animal hospital. “I’ve got hope because he’s breathing,” Herald reflects quietly, “but as we’re driving, he goes limp and I feel the life go out of him.”

There, in the vet’s office, Herald “broke down like a baby. It was like losing a part of your family.”

Nearly 26 years later, Herald still has a difficult time talking about Ingo’s murder. In part because of Herald’s love for his canine companion, but mostly, he says, because Ingo protected him when he was most vulnerable.

“Ingo gave me my life. It could’ve been me. That bullet could have hit me in the head. He gave his life unselfishly for me,” states Herald.

Psychotherapist Stephanie Samuels, who offers crisis counseling to law enforcement officers, says K-9 officers build an especially unique relationship with their partners because they take their partners home with them. “They suit up and work together and they dress down and play together,” she says, adding, “I don’t know any relationship that has that. Even husbands and wives who are both law enforcement officers are not typically allowed on the same shift.”

So when a K-9 lays down his life for his handler, his handler is also wounded, explains Samuels. “K-9s make that sacrifice without question, without a second thought,” she says. “And the sense that the officer won’t be able to take care of them is brutal. This animal is no longer going home with them. Their unspoken bond has been broken.”

Although Herald owes his life to Ingo, the retired officer says he doesn’t harbor any survivor’s guilt, a common thread among officers who have lost partners. Herald says he hates that Ingo is gone, but is proud of his K-9 for doing what he was trained to do.

The Nashville Police Department was proud, too. As the first dog ever killed in the line of duty in Nashville, Ingo received a police funeral with honors. He was buried in a donated children’s casket and a local monument company engraved the dog’s prayer on his headstone. And to this day, Ingo’s portrait, plaques, trophies and awards are displayed in the Herald home.