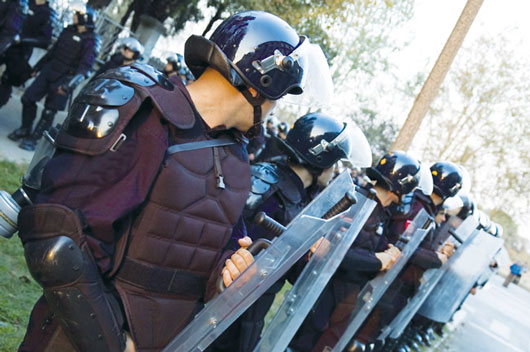 The 40 mm launcher from Defense Technology, part of the Safariland brand, is designed to fire any of the company’s 37 mm or 40 mm less-lethal munitions. The barrel of the launcher is equipped with both a ghost ring sight and a full Picatinny rail for the addition of other sight types or accessories. In addition, the barrel is also fully rifled, which increases the accuracy potential of the less-lethal round. A triple-latch system provides the additional strength necessary when using the “hotter” extended-range rounds. MSRP $1,100.

The SABRE MK-60 is designed for chemical crowd control with large-volume OC liquid spray. It makes several improvements over the prior crowd-management device, the MK-46 — namely the ability to recharge without a separate nitrogen tank equipped with a Schrader valve. This allows for refills of both nitrogen and OC in the field through the use of a pre-charged nitrogen cartridge. The company has also more than doubled the volume, taking the MK-60 to 30 one-second bursts. Additionally, the nitrogen cartridge eliminates the guesswork and monitoring of pressures while filling. MSRP $1,500.

The Enforcer is designed to compete directly with the likes of the Taser X26 and M26 series but at a lower price point. The Enforcer’s Dart Pro options have an effective range of 15 to 21 feet with a similar replaceable nitrogen cartridge as the means for propulsion. The replaceable ammunition cartridges are compatible with the Taser X26 and M26 ECDs, which eliminates the need to order Taser ammo for departments that already possess one of those models. In addition, the Enforcer uses technology that shuts down the unit if aggregate exposure to the body exceeds 15 seconds but can also be overridden. The Phazzer Enforcer features an internal 160-lumen, high-intensity LED light and four alternative variations of non-lethal ammunition cartridges that can each be fired one time. MSRP $599.99.

The Standard Multiple Application Response Tool baton is not your average baton. What makes this baton different? For starters, there’s the 300-lumen LED light, pepper spray-dispensing system, glass punch and customizable striking areas. The most recent addition is a metal detector. Best of all, these accessories can be deployed with one hand, which leaves an officer’s other hand free for restraining a suspect or accessing his or her weapon. MSRP $220.

The Talon is Armament Systems and Procedures’ new offering this year. The DiscLoc, button-release baton, like all the company’s expandable batons, can be deployed with a sharp, sweeping action. However, with a push of the button the Talon can also be pulled out with the opposite hand, which allows for easy deployment in confined spaces. This is made possible through the use of two opposing discs on the inside of the baton that secure each section of the shaft in place. To retract the baton, simply push the button again and either press on the end or place the Talon in the included sheath. MSRP $175.

The 40 mm eXact iMpact Extended Range Round from Defense Technology, part of the Safariland brand, is designed for the company’s 40 mm Launcher and offers increased velocity for greater accuracy over longer distances. This lightweight, high-speed projectile incorporates a plastic body and a foam nose that is stabilized by the rifling inside the launcher barrel. Just as in a rifle or pistol, rifling dramatically increases the accuracy potential of a fired projectile. Additionally, smokeless powder allows for very consistent velocities (another plus for consistent accuracy). The Extended Range Round is most effective for incapacitation when used within the optimal energy range of 10 to 70 meters. MSRP $26.99.