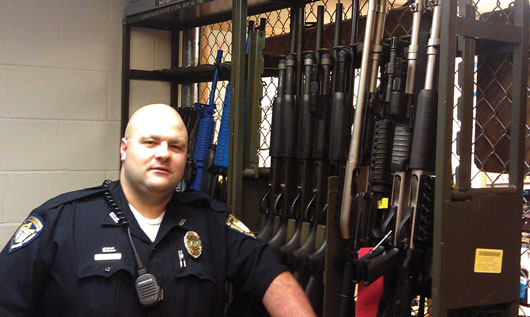 The Fall 2012 issue of the Journal took you inside the world of armorers, who not only keep their departments’ weapons up to spec and troubleshoot issues, but also affect their departments’ firearm and accessory purchasing decisions and are on the pulse of weapons-related changes in policing. Below, learn more about the process of becoming an armorer.

Most departmental armorers have years of personal and on-duty firearms experience by the time they start the certification process, but attending armoring courses, often taught by manufacturers, ramps up that knowledge in a short period of time. Courses generally last anywhere from a day to a week, depending on the complexity of the weapon system, and combine mechanics, nomenclature, maintenance and other classroom work with hands-on learning, generally with the department-issued model to speed up the armorer’s familiarity. Testing includes written and practical tests, which can range from assembling firearms from the frame up to elements of gunsmithing and identifying potential problems.

“I’ve always liked the Remington [870 course. Remingtons are] very easy to work on and very forgiving,” says Ohio Lodge #56 member and Delaware, Ohio, P.D. Officer John Hartman, a 12-year law enforcement veteran and armorer for about nine years. He adds, “The Sigs are intimidating at first, but after you’ve done as many as I have, they’re a no-brainer.”

For Lieutenant Stan Miller of the South Charleston, West Virginia, P.D. and West Virginia Lodge #85, a 21-year veteran of his department and armorer since 1993, getting certified for his department’s HK MP5s was the most difficult course he attended. “You’re talking about the difference between a semiautomatic pistol and … full automatic weapons where you’ve got a weapon with a three-shot burst or select fire. There’s a lot more mechanisms in those actions that you have to work on as opposed to just a pistol action,” recalls Miller.

Other courses, such as the Glock armorer course, are much more streamlined. In the case of the South Charleston P.D.’s Gen 4 Glocks, the construction accounts for the difference in training. Says Miller, “[Since] a Glock pistol only has 33 parts, you could throw 100 [disassembled] Glocks in a box and reassemble 100 Glocks from all the mixed parts. If you try to do that with a Smith & Wesson or a Sig, where some of the parts have to be specifically fitted to the gun, you won’t have that kind of luxury.”

Would-be armorers should visit the following manufacturer websites for courses, as well as investigate other classes such as those from associations. According to Miller, it never hurts to see if the department is willing to fund enrollment in a class. “It’s cost-effective to have an armorer or two on the department. Your chief or administrator would probably rather spend the amount to send you to a course and get you trained than to ship a gun off and have it down for two weeks when it could be something as simple as a small spring to fix it.”

Have you ever attended an armorer course? What was your experience? Leave a comment below.

Look for “Armed and Ready” in the Fall 2012 issue of the Journal.