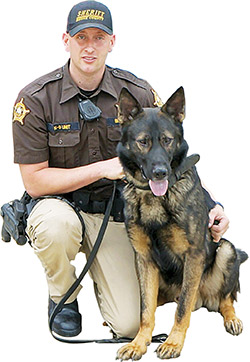 We all had one of these kids in our elementary schools. You know, the type that dressed as a police officer every Halloween. Or the student whose hand shot up with question after question when a badge visited a classroom. Even the child whose parents purchased a ride to school in a squad car at the local law enforcement silent auction fundraiser.

Maybe you were that kid. Most certainly, Tyler Brockman was that kid.

Brockman realized his dream at age 25 when he secured a job as a deputy with the Boone County (Kentucky) Sheriff’s Department. But for the boy who collected police K-9 playing cards, Brockman had one more goal in mind — becoming a K-9 officer. 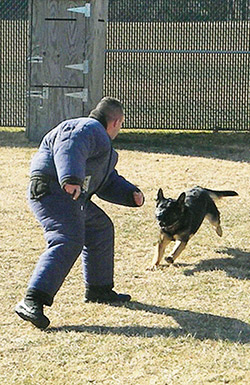 Brockman got the position, a new partner and a new best friend, his K-9 Fraser.

The now 29-year-old Brockman, who belongs to FOP Kentucky Lodge #46, still remembers the phone call that confirmed his new career path: “The supervisor stated, ‘Tyler, I’m sorry but not everyone can have a police K-9 and this is the part of my job that I hate doing — calling all of the candidates to inform them of what happened. Unfortunately on this phone call I regret to inform you that you are our next K-9 handler.’ It took me a few seconds, which felt like an eternity, to realize he was trying to play with my mind and confuse me.”

The bond between a dog and his handler is unique. They are responsible for each other’s well-being and safety. The handler feeds, trains and cares for his K-9. In return, the animals will protect their handlers at all cost, even if it means sacrificing their own lives. 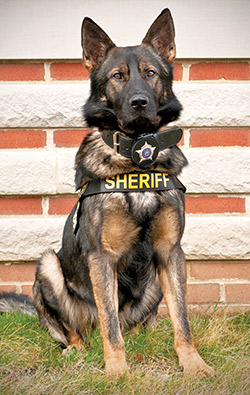 “The wife and I have an inside joke that I love him more than her because he actually spends 24 hours a day with me, whereas I only see her on a limited basis,” Brockman says. “[Because of] this, though, all K-9 handlers are able to read and understand their dogs in a way that nobody else can.”

Psychotherapist Stephanie Samuels, who works throughout the country with law enforcement officers and military personnel, says this relationship is particularly remarkable given that the officer and K-9 speak different languages. “There is no discussion of marital problems, kids who are acting out or stress on the job. Yet, if you were in the car with them, you would swear they were talking about all [those things].”

Handlers don’t refer to their K-9 as their dog — K-9s are their partners, and in most cases, members of their family. Like most handlers, Dave Roesler, a K-9 officer with the Baltimore County (Maryland) Police Department and member of FOP Baltimore County Lodge #4, lives at home with his K-9 Luke. Roesler says Luke is very playful and sociable with family and friends and gets along well with Roesler’s retired K-9 Ben. Read more about Dave Roesler’s K-9 experience with the Baltimore P.D. 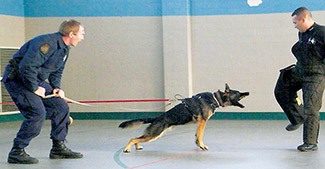 That’s the thing about being a K-9 officer, your partnership doesn’t end when your shift does. It comes home with you.

K-9s have a crucial role in police operations that enhance investigations (search and rescue), and in many cases, perform roles that human officers biologically can’t do (drug and bomb sniffing).

“[Fraser] has been able to detect a very large and substantial amount of narcotics that may have never been found due to his special and heightened sense of smell that humans simply do not have,” explains Brockman. 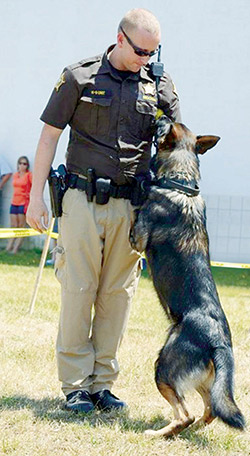 The training for both handler and K-9 is rigorous. For instance, Baltimore’s patrol dogs are put through 16 weeks of patrol training and an additional two months of specialty training. All of the dogs are retrained monthly throughout the year and re-certified twice a year. All of this is done with their human partner, requiring a level of dedication and emotional attachment that is unrivaled as far as police partnerships go.

In spite of its challenges, Brockman says there is no other partner he’d rather have.

“Every night when I walk out of roll call and see him in the cruiser looking at me with his tail wagging, I know this was my calling and exactly what I wanted to do.”

If barks could translate into words, Fraser would probably say the same thing.