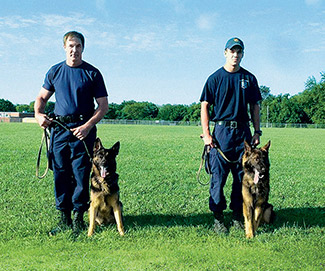 Like father, like son: Dave Roesler and his son, Stephen, are both K-9 officers with the Baltimore Police Department, which has the state’s second-oldest K-9 unit.

When most people think of a law enforcement officer they most likely picture a uniform, badge and gun, not fur, a wet snout and a wagging tail.

Yet the K-9 is one of the most important and useful officers in any law enforcement squad.

These highly trained dogs (most often German Shepherds or Belgian Malinois) specialize in a number of tactical tasks that are not only crucial in any police investigation but are also biologically impossible for their uniformed counterparts.

For instance, when the Baltimore County (Maryland) Police Department is conducting a gun or explosives search, items that are often undetectable to the human nose, it may call in K-9 Officer Dave Roesler and his partner, Luke. 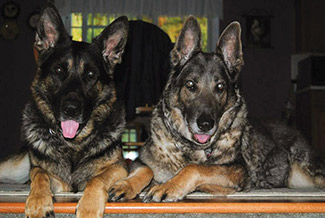 Roesler and Luke make up just one of the department’s more than two dozen K-9 teams who respond to a combined 10,000 calls for service a year. Founded in 1961, the Baltimore County Police Department K-9 Unit is the second oldest of its kind in the state. Patrol K-9 teams are available anytime, day or night, 365 days a year; special details like search and rescue or explosives detection are provided on an on-call basis.

It’s not a career choice for every officer, but Roesler remembers the moment he decided he wanted to work with a police dog. It was 1986, he was in the academy, and the K-9 Unit was giving a demonstration.

“Right then and there I was hooked and decided that getting in the K-9 Unit would be my career goal,” says Roesler. He’s been with the unit for 18 out of his illustrious 27 years with the department.

Being a K-9 officer is a demanding role. Roesler and Luke work the midnight shift. When they were first partnered, they had to go through 16 weeks of patrol training and an additional two months of specialty training. The training continues monthly throughout the year.

The relationship between handler and K-9 doesn’t end when the shift is over, though. Luke lives at home with Roesler and his family (and Roesler’s 14-year-old retired K-9, Ben), and Luke requires all the love, care, exercise and attention that any family pet needs. It’s not just a commitment for the officer, but for his or her family, too. “When at work, Luke is an aggressive and hard worker,” says Roesler. “At home he is very playful and sociable with family and friends. He is a very obedient partner with limitless energy.”

The bond between handler and dog is unique, says Stephanie Samuels, a New Jersey-based psychotherapist who works throughout the country with law enforcement officers and military personnel. “The canine officer is involved with their partner from the beginning of their lives or very early on. Imagine adopting a child at age seven and not only being responsible for them, but them for you from that age on. Add to that the fact the two of you have to go to school together, get dressed for work together, go on calls together and then home to relax and play. I know of no other relationship that requires such dedication and emotional attachment on a consistent basis.”

Roesler’s dedication to his profession and his partner now runs in the family, too. Roesler’s son, Stephen, is also a K-9 officer in the same unit; his partner is named Chuck.

“That was the highlight of my career,” says Roesler. “He grew up around my K-9 dogs and his desire was to do the same as me.”

Now there are four officers in the family, but only a couple of them come with wagging tails.