“Police Battle Fire Inside the Cage” took you inside the world of amateur public safety MMA competitions as part of Xtreme Cage Wars. But MMA isn’t the only extreme athletic pursuit of FOP members. Below, read about fellow members who take to the track to ride in the Fire & Police Benefit Motocross racing series.

The gate drops and all 15 riders surge forward at once. Elbow to elbow, they guide their 200-pound bikes onto the track, bracing against airborne rocks and dirt called roost and jostling for position over the crucial 50 yards funneling into the initial turn. The one who gets there first wins the holeshot, which can make or break a race. It’s a scenario that every motocross racer knows intimately, but these aren’t your average motocross racers. For riders in the Fire & Police Benefit Motocross (FPBMX) racing series based in Ohio, rushing into the fray off the track is as common as on it.

Public safety personnel and motocross aren’t a foreign combination, but motocross is a rare off-duty pursuit among the badge-wearing set. Los Angeles County Firefighter Ed Wilson is credited with establishing the Fire & Police Motocross Nationals in 1989, and the concept came east in 1999, when Akron, Ohio, Firefighter Ray Martin started FPBMX, one of the most enduring regional race series. 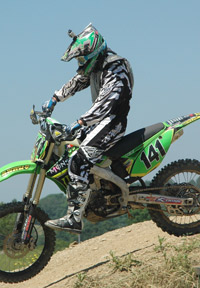 Today, public safety travel from all over the country and Canada once a year to race against 100 or so of their brethren and civilian racers in 30 classes, which consist of two sets of races called motos (anywhere from three to five laps around a track). The motos are scored according to place, with the second moto serving as the tiebreaker. Since 2008, FPBMX has been held the same weekend as the Ohio Police & Fire Games, giving the riders another chance to square off.

But for an officer or firefighter, revving a 450cc bike up to speeds in excess of 50 mph and launching off 70-foot or larger jumps is a different animal than, say, playing a little slow pitch with a few guys from the station on the weekend.

To begin with, the level of physical conditioning that motocross demands will disabuse anyone of the out-of-shape cop stereotype. ATF Special Agent Brad Kaufman, an FPBMX competitor for more than a decade and race coordinator, takes a cardio-centric approach to training, with four to five days per week spent on the elliptical machine, weightlifting to improve strength but not create bulk, road biking and riding at a track. If that seems extreme for a sport that doesn’t require running, it’s only because most people who don’t ride have never experienced the fatigue that comes with 35 minutes per moto of constant jarring and an elevated heart rate of 200 beats per minute. 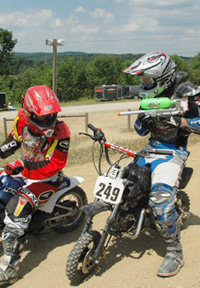 Senior Patrolman Brian Price of the Copley Township, Ohio, Police Department and Lodge #191, who has raced with FPBMX since 1999, explains, “A lot of people think you sit on a motorcycle and all you do is turn the throttle and go, but motocross works almost every single muscle in your body. You’re standing up for the bumps, the whoops, the jumps. And then you’re sitting down and shifting your weight back toward the rear to get traction … or sliding your midsection all the way up to the front of the seat … to get a better turning radius. Your neck’s moving. You’re clutching with your left fingers, and hanging on to the left side of the handlebar. On the right side, you’re working the front brake with your two front fingers, and you’re working the throttle and hanging on at the same time. You’re shifting with your left foot the gear shift lever and on the right foot, you’re working the rear brake pedal, so you’re always moving.”

“If you’re not in shape, as soon as you get tired you start sitting down more instead of standing up. The bike starts riding you more than you riding the bike,” adds the Akron, Ohio, P.D.’s Sergeant Doug Sandor, who currently serves on the Lodge #7 Executive Board and has raced with FPBMX since 2002. 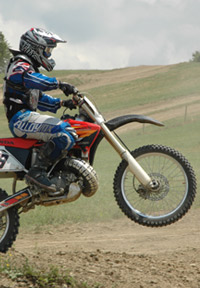 There’s also the potentially career-ending dangers associated with crashing — not a matter of if but when in motocross. Despite the fact that you’ll find fewer aggressive takeout moves at FPBMX races than at your typical amateur race, the intensity of the competition is high, and most of the riders have weathered their fair share of pain.

Kaufman has suffered two broken collarbones, a broken pelvis and torn abdominal muscle over his 11 years of racing. Getting caught between the front wheel and chassis of Martin’s bike left Sandor with a concussion, separated shoulder, injured back and several days on light duty. Price broke his hands and ribs four times and knocked his hips out of place but says, “I’ve been pretty lucky. I haven’t suffered any bad injuries.” In fact, all three seem to shrug off their injuries as if to say it’s all in a day’s ride.

“Most of the people who do this are adrenaline junkies,” admits Sandor. “They like to push the envelope and see what they can do next.” 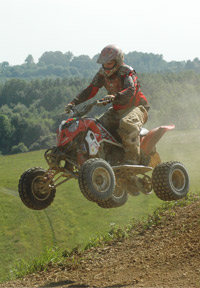 But beneath an appetite for high-octane pursuits and the kind of toughness that both a career in law enforcement and MX require, there are other qualities that make a good racer as well as a good firefighter or officer. Kaufman points to the level of planning required before both racing and his callouts as part of the Special Response Team: “We don’t just go hit a door or lock somebody up. There’s preparation for both, whether it’s in the gym or running routes or doing intelligence work beforehand. Getting a game plan together: How we’re going to attack the gate or who I’m competing with or how do I negotiate that corner or that jump? … Mindsets have to be similar. You’ve got to be patient on the track as well as off the track when it comes time to take care of work.”

And like many public safety organizations, FPBMX is also focused on giving back to the community. Proceeds from the race — approximately $67,000 to date — go to the Akron Children’s Hospital Burn Institute and Make-A-Wish Foundation. Says Sandor, who helps coordinate the race, “[It’s important for us] to do things for people that don’t have the chance to do what we do. They’re not going to have a chance for the rewarding career that we have. They’re not going to have the chance to ride dirt bikes. [We want to] do something to make their dreams come true.” 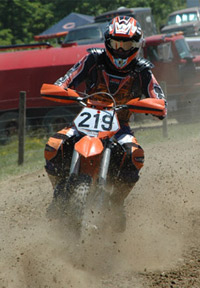 While the core veteran FPBMX racers are serious competitors on the track, off it they extend their camaraderie to so-called bench racing in the pits, trading war stories, popping open adult beverages and firing up the grill with friends and families. Often the brotherhood continues long after the roar of the motos. When the Twin Towers fell on 9/11, Price received a call from an officer from New York at ground zero seeking the support of a fellow FPBMX racer.

Says Kaufman of the FPBMX races, “For most of us, it wasn’t so much about winning, it was the competition amongst our friends and our fellow brothers in law enforcement or public safety.”

“We just love it,” Price adds. It’s the best weekend of the whole year.”

Want to learn more or compete in the 2013 FPBMX competition? Visit www.firepolicebenefitmx.com.

Photos © Priceless Photos.
Thank you to Kimberly and Brian Price for providing photography.

For more stories of FOP members competing in extreme sports,
check out the Summer 2012 issue of the Journal.