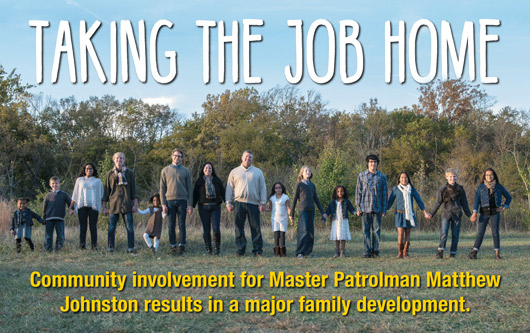 Master Patrolman Matthew Johnston, a member of FOP Lodge #198, takes the service element of “to protect and serve” very seriously. When the Noblesville (Indiana) Police Department, for which he is a school resource officer, called for volunteers to partake in its Shop With a Cop program back in 2002, Johnston didn’t hesitate to sign up. Little did he know that meeting recipient Jose Serrano would forever change his life. What’s more, it led his family to grow from five children to nine, and oh yeah, he and his wife, Beth, adopted three more along the way. 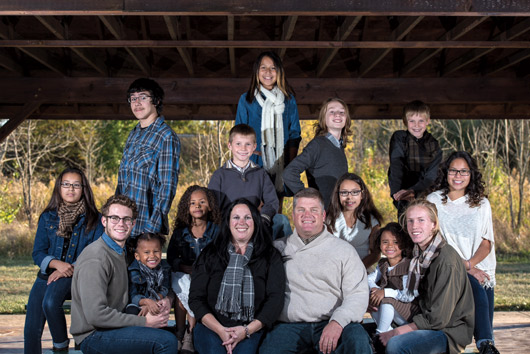 When Serrano fell terminally ill in 2013, she asked you and your wife to take guardianship over her four daughters. Why did she want that?
She knew things were not right with her biological family. They were involved in some activities that weren’t appropriate, and they were not going to be safe for the kids. Although the girls had a stepfather, he was basically threatened if he tried anything. He was afraid for his life, so he disengaged from trying to keep the girls. Unfortunately, Jose’s family snatched up the girls, and they didn’t get a chance to say goodbye to their mother before she died.

That didn’t stop you from keeping your promise. How did you gain guardianship?
We started working with the courts here in Indiana. We were granted custody, but it took almost eight months or so to get the paperwork processed. Then it took us another two to three months to get them once we were granted guardianship. I ended up going to Texas and spoke with some officers there to ask for their help to get the girls. There’s always a concern because you don’t know how people will react. It turns out the uncle stated on a phone call with us, “I was going to call you anyhow. We can’t handle these kids.” So we loaded up their stuff and drove back.

How are the girls now?
They have adapted so well. They’re doing great in school and are involved in activities. They’ve had more opportunities than ever before.

This wasn’t the first time your family took in children from the community who needed help. You also adopted three other girls. How did that come about?
My wife was running a soup kitchen at the church and a lady came in with twin infants, whom my wife knew were not hers. The woman said a friend kept dropping them off. My wife offered assistance if she needed it, and a little while later, the lady called us.

We were able to reach the biological mother and gained her permission to help take care of the twins. Eventually the mother said she couldn’t take care of them anymore. We tried to help her, but she couldn’t make a change, so we gained custody. The twins’ grandparents also asked us if we could take the mother’s other daughter so the girls could be raised together. We’ve had custody of all three for about three years, and we completed their adoption in 2015.

How have these experiences benefited your role as a school resource officer?
I also run the Explorer and D.A.R.E. programs, and in those roles, I talk about my family. Although most people can’t relate to a large family, it shows the kids at school how much I care for all of my kids. It says to them that if I really care for others, then I must be telling the truth about caring for them as well.