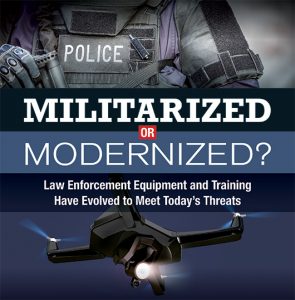 As police officers are increasingly criticized for their appearance and actions, the mass media have highlighted — and demonized — law enforcement’s use of armored vehicles, heavy ballistic vests and other equipment, some of which is allocated to agencies through the Department of Defense. Critics argue that law enforcement has become militarized in both its equipment and its tactics. A more accurate analysis, however, is that our nation’s law enforcement agencies have simply acquired modern-day equipment to meet modern-day threats, utilizing advanced training techniques to save lives in any type of situation that may strike their communities, from conflicts to missing children to natural disasters.

THE NEED TO BE PROPERLY EQUIPPED

When critics wonder “Why do the police need armored assault vehicles and machine guns?” a good response is to ask these three questions: 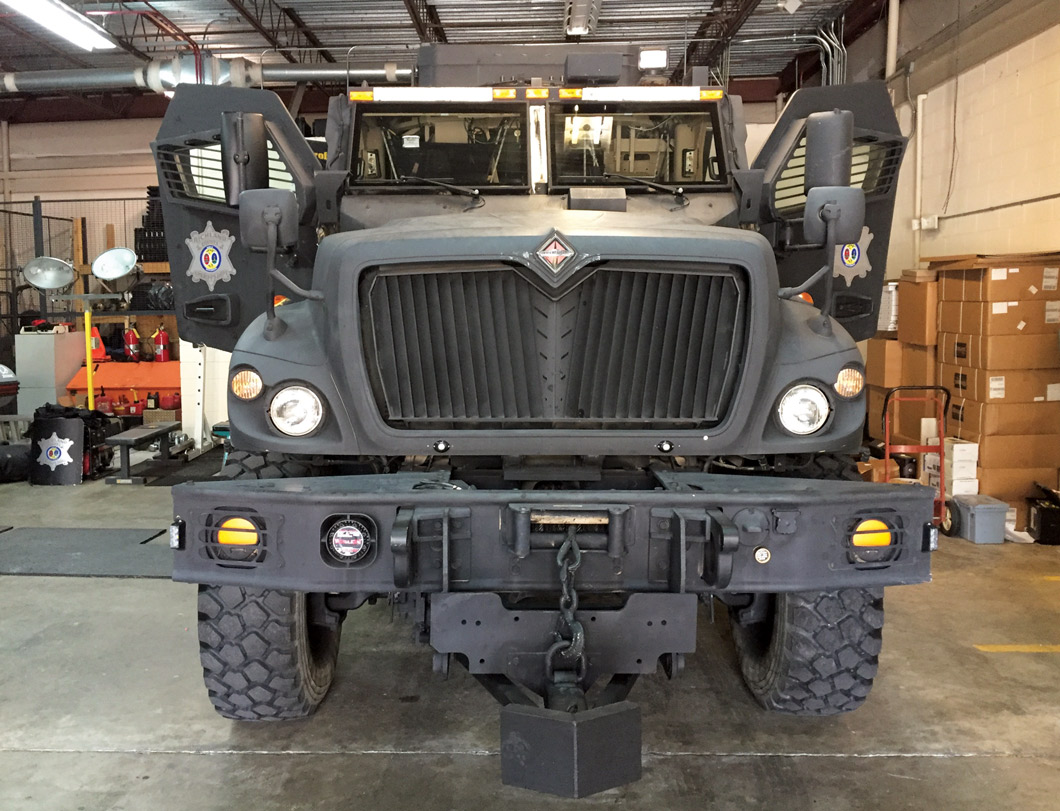 A Mine-Resistant Ambush-Protected (MRAP) vehicle and a Yuneec Q500 Typhoon quadcopter (below) are among the modern tools utilized by the Richland County Sheriff’s Department in South Carolina.

The correct answer to the first two questions from anyone in their sound mind is “yes.” Many have been asked the third question after a tragic event that cost someone their life has already occurred. It is probably safe to assume that the answer didn’t come easy, if it came at all.

Unfortunately, the majority of lessons learned in law enforcement are learned through mistakes, many of which are due to lack of training and equipment. Over the years, there have been countless incidents where specialized equipment was needed but was simply not an issued option for the responding agency, and individuals were injured or killed as a result. There are also some calls that have tragic outcomes no matter what the response is. The “risk factor” or “X factor” of an incident is unpredictable, and calls for service can inherently go bad for responding personnel, sometimes without warning and with little reaction time. Given all these facts, there is absolutely no excuse for law enforcement officers to lack the proper training and equipment to enable them to mitigate any situation safely and effectively. This burden rests on the shoulders of law enforcement executives, local government and community leaders, who must take the time to educate themselves on the benefits of the specialized training and equipment available to the agencies that serve their communities. 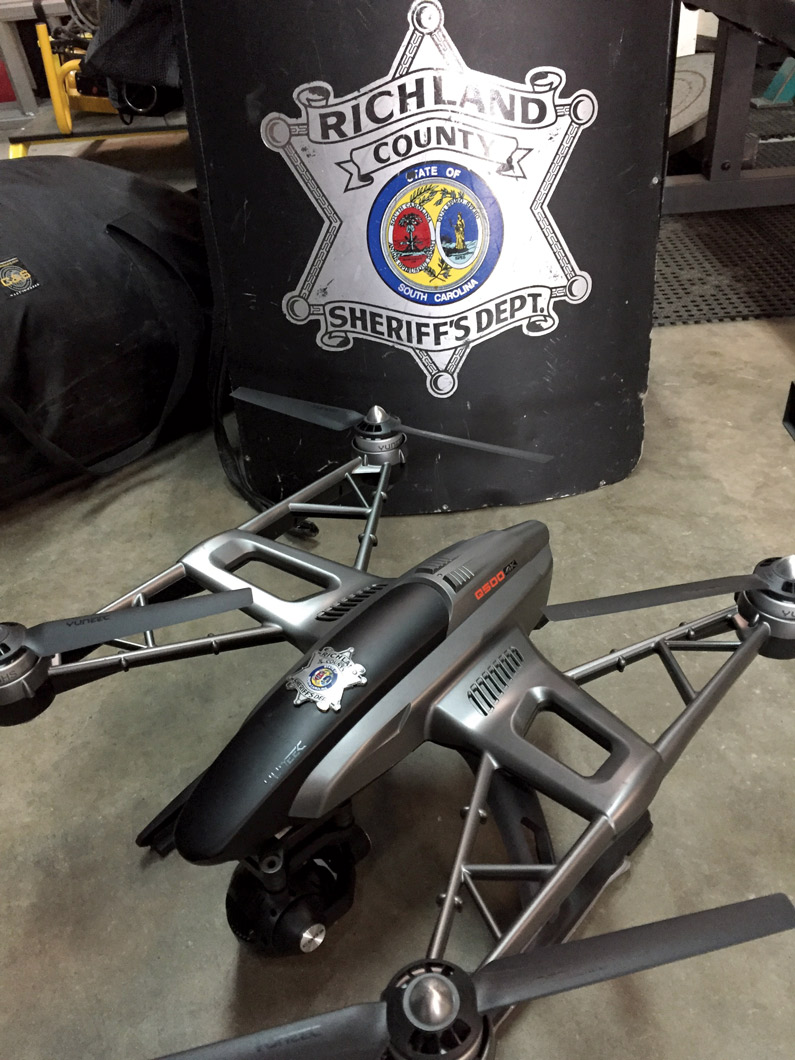 Upgrading equipment and training for first responders gained popularity during the 1960s. One notable incident was the August 1, 1966, Texas Tower mass shooting. Charles Whitman, a 25-year-old Marine Corps veteran suffering from mental illness and acute fits of anger, heavily armed himself, ascended the tower at the University of Texas at Austin and shot 46 people, wounding 31 and killing 15. Responding law enforcement officers had no specialized training for this type of incident, and most were armed with revolvers and shotguns. Some of them reportedly went home and retrieved their personal weapons to combat the deadly sniper threat.

Since then, mass shootings employing varied-caliber weapons have become sadly commonplace occurrences. Ambushes on officers, domestic and international terrorism, and natural disasters are just a few of the other rising trends that first responders are tasked with confronting. Today’s threat paradigm is dynamic and unforgiving, and law enforcement is expected to respond to any incident and handle any situation with textbook proficiency. The public’s expectations for success weigh heavily on all first responders — another reason they should be properly equipped and trained to do their jobs, with tools and methods that are equal to the task at hand. 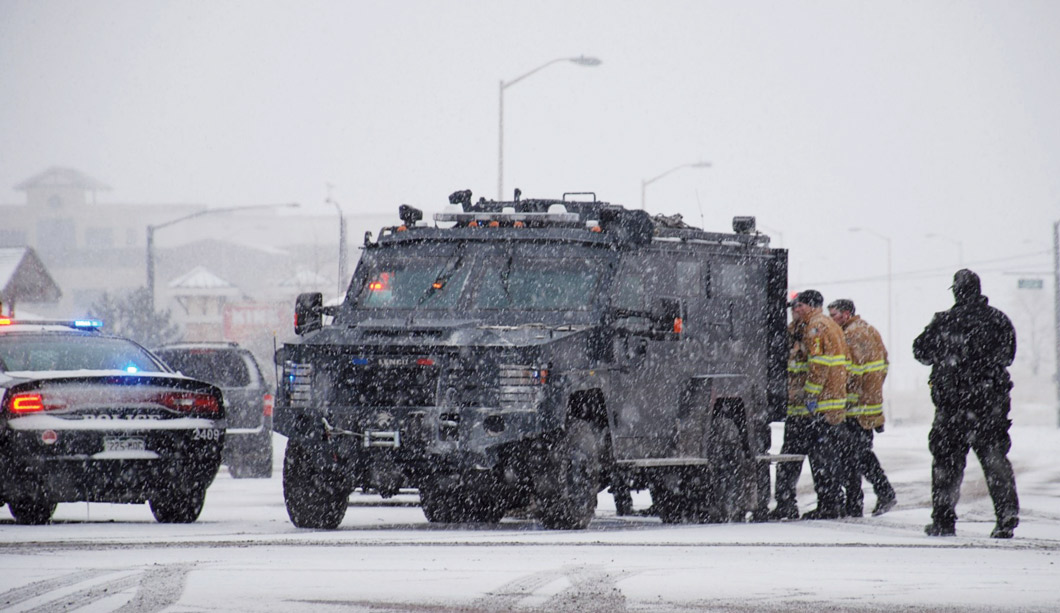 Armored vehicles were crucial in rescuing hostages when a gunman attacked a Planned Parenthood clinic in Colorado Springs in 2015. (Photo courtesy of Lenco Armored Vehicles)

A major source of advanced gear for law enforcement is the federal government’s 1033 Program, which was created in 1997 when President Bill Clinton signed a law authorizing the Department of Defense to transfer excess military equipment to civilian agencies. Since then, more than $6 billion worth of property has been transferred to thousands of agencies nationwide, including rescue equipment, tools, rifles, clothing, medical supplies, utility vehicles, armored vehicles, generators, air frames and much more.

However, in the wake of the 2014 Michael Brown shooting in Ferguson, Missouri, and other recent controversies over police actions, the 1033 Program has come under fire from the public, the media and political figures. Critics of police were outraged that officers deployed military vehicles during the subsequent protests and riots in Ferguson. The media reported over and over how Ferguson police were patrolling the streets in military armored vehicles, and the follow-on stories detailed how law enforcement agencies across the nation obtain such vehicles through the 1033 Program. But according to a tactical supervisor who worked the entire Ferguson incident, the St. Louis County Police and Missouri Highway Patrol provided the tactical armored vehicles. The vehicles on scene included a Lenco BEAR and BearCat equipped with a Patriot System, both of which were purchased by their respective agencies and not furnished by the 1033 Program or any other type of government surplus program. In addition, few media outlets acknowledged the fact that armored vehicles and other advanced apparatuses are invaluable tools for protecting first responders and community members. 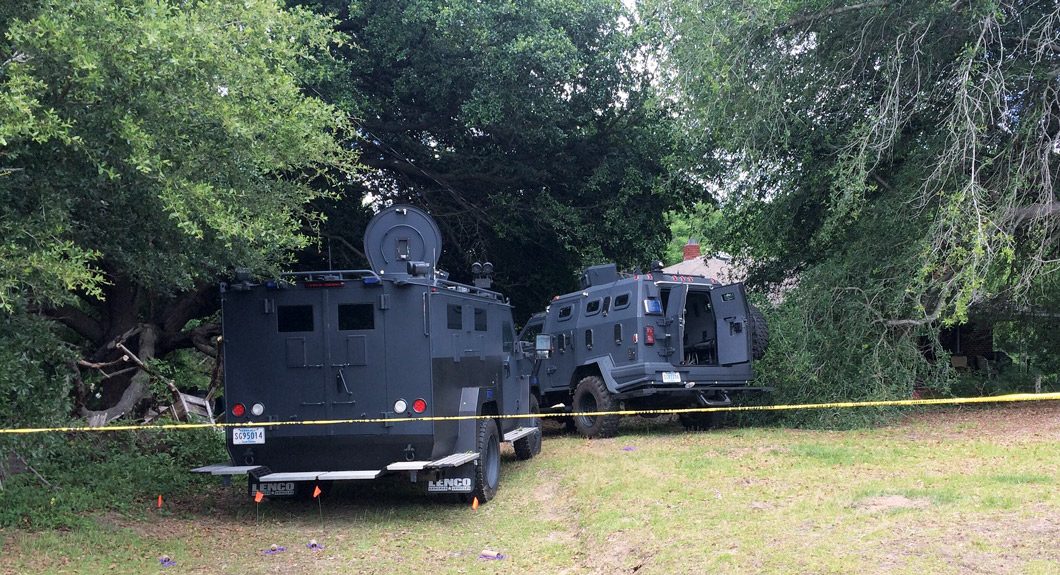 When a barricaded mentally ill individual opened fire on the South Carolina Law Enforcement Division’s SWAT team in May 2016, no officers were injured thanks to the armored vehicles protecting them. (Photo courtesy of SLED)

The FOP and other law enforcement leaders have repeatedly pointed out that restricting the 1033 Program hampers the capabilities and effectiveness of many agencies, especially those with tactical units. For instance, in response to the June 2016 mass shooting at the Pulse Nightclub in Orlando, law enforcement used a controlled explosion to distract the shooter and an armored vehicle to breach the walls, and one officer survived being struck in the head thanks to his ballistic helmet — yet at the same time all of this lifesaving equipment was considered “controlled” and made more difficult for departments to obtain. The FOP is hopeful that these restrictions will be rolled back by the new Congress and administration.

There are many myths about law enforcement equipment. Some people believe that armored vehicles are assault vehicles used to wage war against the public, but the reality is that they are utilized to transport officers, provide ballistic protection for both officers and citizens during critical events, deter hostile acts toward officers and others, and navigate severe weather conditions. Similarly, critics may believe that heavy body armor is worn to intimidate, when its main purpose is to provide officers with a higher degree of ballistic protection and allows additional gear to be worn for efficient access. Rather than being used to spy on the public, helicopters equipped with infrared camera and lighting systems help law enforcement locate lost persons, provide aerial surveillance for ground officers during pursuits and searches, and perform rescues in areas that deny ground access, day or night. The purpose of weapons systems is not to kill people, but to provide a means for officers to defend themselves and others when ability, opportunity and jeopardy exist to utilize a warranted level of force. Specific weapons systems allow for precision engagement to effectively stop a threat and minimize the chance of collateral harm. 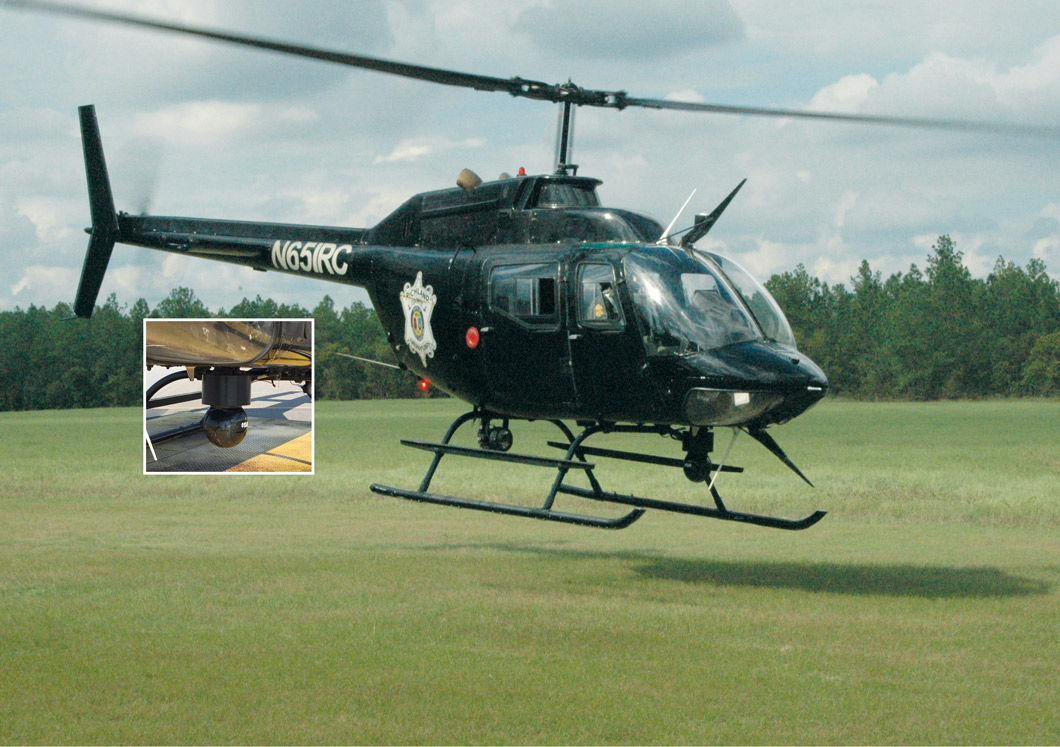 The Richland County (S.C.) Sheriff’s Dept. 1971 OH-58 helicopter was obtained from an active-duty army unit in 1999 and upgraded with state-of-the-art equipment, all without using taxpayer money. (Photo by Lloyd Dunham, courtesy of Richland County S.D.)

There are countless stories of how first responders utilizing advanced training and specialized equipment have saved lives in recent years. In Bozeman, Montana, in June 2015, a man barricaded himself in a hotel room with a small child and shot at responding officers. The Bozeman Police Special Response Team arrived with a BearCat, and the subject released the hostage and surrendered upon seeing the vehicle. When a gunman opened fire on a Planned Parenthood clinic in Colorado Springs in November 2015, killing two civilians and an officer, law enforcement ended the resulting standoff by ramming an armored vehicle into the front of the building, allowing the civilians trapped inside to escape and leading the shooter to surrender. Following the December 2015 mass shooting in San Bernardino, law enforcement used armored vehicles for protection as they surrounded and approached the terrorists’ heavily armed SUV; only one officer was injured in the shootout that killed both suspects.

This equipment is not only useful for minimizing loss of life in violent confrontations. In 2011, the Richland County Sheriff’s Department in South Carolina used its infrared-equipped helicopter to locate a wanted armed robber in a rural area that ground units could not approach, then directed officers through a high-speed vehicle pursuit on winding roads until the suspect was apprehended without incident. And agencies throughout the nation, including in Louisiana, West Virginia and North Carolina, have used surplus military vehicles in flooded areas to reach stranded drivers and rescue residents trapped in their homes. 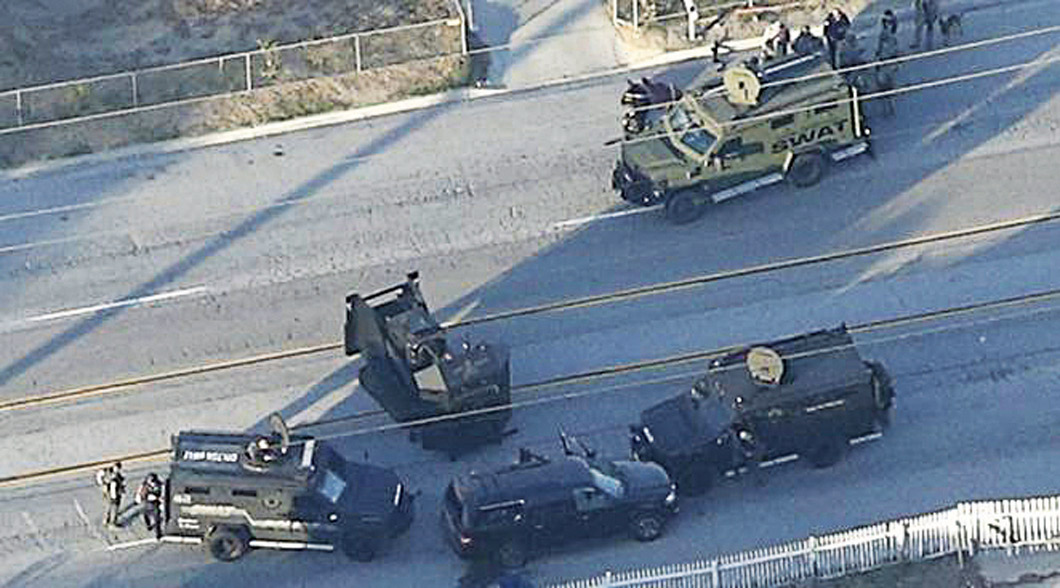 Law enforcement officers are the guardians within every community. There is a hierarchy of life that is followed during all law enforcement responses: victims, other innocent persons, officers and suspects. Time and time again, officers knowingly place themselves in harm’s way in order to protect the public, the majority of whom are total strangers. The availability of equipment and training plays a huge part in their success. Every feasible measure must be taken to ensure that the most modern tools and tactics remain available to public safety agencies.

ALLOCATIONToo often, agencies make the mistake of purchasing a piece of equipment without proper due diligence and having the appropriate agency personnel spend time adequately conducting training and evaluation (T&E) with the gear. Prior to purchasing any equipment, research the various manufacturers, contact agencies using the same or similar equipment to discuss their successes and failures, and have qualified personnel T&E the equipment and provide a written performance report to the chain of command. Cost will always be a factor with any purchase, but it must not be the primary deciding factor during the procurement process. There are numerous manufacturers of state-of-the-art equipment specifically designed for law enforcement applications, although these products often come at a substantial cost. One of the best sources is the federal government’s 1033 Program; for further information, contact your state’s 1033 Program manager.

TRAININGOnce any new piece of equipment has been added to an agency’s inventory, all appropriate agency personnel must be properly trained in its operation. The tactics, techniques and procedures taught must always be legally sound, in line with the agency’s policy as well as the manufacturer’s recommendations. Remember, failure to train is one of the major liability issues faced in law enforcement.

DEPLOYMENTMost major law enforcement operations have potential to evolve into a major media event. This is especially the case with tactical operations. Conceptually, it is better to have something and not need it than to need it and not have it. With that said, high-profile apparatuses such as Mine-Resistant Ambush-Protected (MRAP) vehicles and long guns should only be deployed when appropriate. Always gauge deployment necessity on the mission at hand and the threat level as the primary measuring tool; the safety of everyone should always be a higher priority than how an officer with a rifle will look on the news. However, common sense and good judgment should always be used.

Read this story in the Spring 2017 issue of FOP Journal.