Don’t flip out when it comes to grilling. Barbecue champion Dr. BBQ shares his methods for mouthwatering morsels hot off the grill. 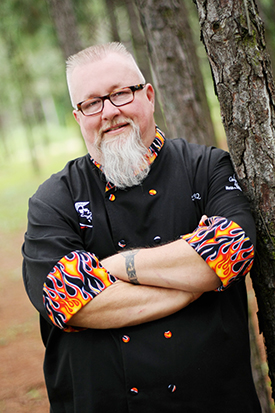 Nothing says “summer” quite like firing up the grill to cook burgers and steaks or barbecue chicken and ribs. The mere mention of it can get mouths salivating in anticipation of that first tasty bite. There’s just something about that sweet barbecue’s smoky flavor that signals summer.

On the other hand, barbecue can become disappointing when burgers burn or chicken is undercooked. While cooking outdoors seems like it should be straightforward, there’s an art to great grilling. “You have to take it seriously,” says Ray Lampe, better known as Dr. BBQ. “If I’m inviting people to my house, I better cook something good for them.”

You may recognize the barbecue champion from his numerous television appearances, including on the Food Network and the NFL Network. Dr. BBQ has won more than 300 barbecue contest awards and written seven cookbooks since entering the competitive cooking world in 1982, when a friend convinced him to sign up for a barbecue rib contest in his hometown of Chicago. “That was like an epiphany for me because, all of sudden, it was all these guys having a few beers with big fires and make-your-own equipment that was adapted to the cooking process, and it involved big hunks of meat. For me, it just worked,” he says.

By the 1990s, Dr. BBQ was recognized all over the barbecue circuit. He devoted nearly every vacation day to traveling to and competing in cooking contests across the country. In 2000, Lampe decided to make Dr. BBQ a full-time gig, and now he does the judging at many of those events.

But you don’t have to be a barbecue champion to cook good food. Here, Dr. BBQ shares his know-how to help you become the master of your grill.

FOP Journal: What do you consider must-have grilling tools?

Dr. BBQ: I don’t use a lot of different stuff. I have a pair of long tongs for something cooking really hot, like a steak. If I’m cooking cool, like chicken, I like to use short tongs because I feel like I have better control. I also have a hamburger flipper.

Then there’s a thing called the Pig Tail Flipper. You don’t want a big fork to stab big holes in the meat. The Pig Tail has a little prong that goes in and it doesn’t hurt the meat too much. It’s a pretty cool item.

One gimmicky tool I do use is called the BBQ Guru. It’s a temperature-control device with an electronic brain and fan that controls the temperature of the grill for you. It’s kind of high-end, but it really works.

Slow-cooking beef brisket is probably the hardest thing — it takes literally years to get good at it — and probably steaks because everyone likes them done differently. The extreme ends of the spectrum — the slow and cold and the really hot and fast — are the hardest.

FOP Journal: What’s your personal favorite food to cook on the grill?

Dr. BBQ: It depends on the day, but gosh, I really like just a big, thick bone-in pork chop.

FOP Journal: You’re known for using charcoal instead of gas. Why do you prefer charcoal?

Dr. BBQ: Taste, taste and taste. [Gas] will never have that woodsy flavor charcoal does. All the gas grill guys will tell you it’s about convenience, but cooking with charcoal is not that big of a deal. When you’re getting ready to barbecue, the first thing you do is light the grill, and by the time you get your marinade ready, make a drink and get your meat prepped, the charcoal is ready to go.

FOP Journal: What do you recommend for lighting charcoal?

Dr. BBQ: You have to start with the fact that there are two different kinds of charcoal: There are the briquettes we’re all familiar with, and then there’s lump charcoal. To me, briquettes are harder to light and they create more ash. I prefer lump charcoal because of the flavor, because of the minimum ash and it’s easy to light. I use a little paraffin fire starter like you would start a log fire with.

But for briquettes, the chimney is great, it just takes a little longer. Another option is the electric starter. Stick it down in the charcoal, and [after] about seven minutes, your charcoal is ready to go.

FOP Journal: How do you clean your grill grate?

Dr. BBQ: When I’m done cooking for the day, I put the lid on, close it down and let the coals go out. The next time I want to grill, I light a new batch of charcoal and put the grate on right away so it gets warmed up. Once I feel like the grill is hot, I come back with a long wire brush. I don’t put it in the dishwasher. I don’t use oven cleaner on it. I feel that once you get it hot, a good brushing is pretty good.

FOP Journal: Are there different cooking methods for different types of meat?

Dr. BBQ: First we have to talk about the difference between grilling and barbecuing. Grilling is how we cook a steak or burger, you know, over direct fire and at high temperatures. Real Southern barbecue is cooked real slow. We cook big pieces of meat for 12 hours and it’s beautiful stuff — the outside caramelizes, this bark gets developed and it’s just melting, falling-apart tender from hours of slow cooking.

But then there’s that whole area in between hot grilling and real slow barbecue. That’s when you need to be cooking with indirect heat. Chicken parts are a perfect example. I put the chicken on one side and the fire on the other. You need the ability to move them back and forth. Even with gas grills, you have multiple burners, so leave some off. If your chicken is getting too dark, but it’s not done on the inside, then take it off the heat. I think that’s a mistake guys make; they don’t know what to do so they just leave it on there until it’s on fire. Indirect heat is your friend in that regard.

FOP Journal: What kinds of wood do you prefer for smoking things?

Dr. BBQ: Some [woods] are stronger and some are milder. For me, the big four I recommend are hickory and oak — they can be pretty powerful — and apple and cherry are milder. Often I’ll use a combination of the two. Hickory is the classic barbecue flavor, but it can be strong. If I use half hickory and half cherry, I get a little of both. When talking about ribs or pork shoulder, I would use hickory and cherry in combination; the same with beef brisket. It’s a big bold piece of meat and it can take on smoke. Pecan wood, if you can get it, is very much middle of the road. If I would use just one piece of wood, it would probably be pecan. With bigger pieces of meat, I prefer to use chunks of wood because they last longer and I’m going to get a lot of flavor.

As far as burgers, I don’t mind throwing a handful of wood chips in right before I put my burgers on to get a little hint of it.

However, it is easy to oversmoke food. We’re guys, we get into it, thinking if a little smoke is good, then a lot is better, but that’s just not the case.

FOP Journal: What else is good cooked on the grill?

Dr. BBQ: I cook a lot of seafood, but it’s easy to overcook. You need to know how to cook seafood in a pan in order to cook it on a grill. Salmon on the plank is a really good way to go with fish. It’s kind of foolproof, and it makes for a really good presentation. I cut it into serving sizes before cooking, so instead of one big piece on the plank, you’ve got four or six servings. Everybody just takes their pieces instead of busting up the whole filet at the table and making a mess.

FOP Journal: What is something unexpected that is great on the grill?

Dr. BBQ: Desserts. Grilled pineapple is great. Take fresh pineapple and cut it either into slabs or big spears and marinate them in brown sugar and a little rum, then grill them directly on the grill. Just char them up a little bit. 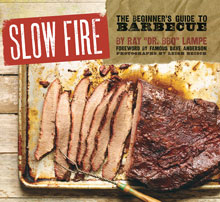 Dr. BBQ is serving up a few of his favorite recipes for you to try! Check out these delicious selections from his cookbook, Slow Fire: The Beginner’s Guide to Barbecue:

Dr. BBQ insists anyone can coax great flavor from the grill if you avoid these common mistakes.

Barbecue sauce too soon
“This is the No. 1 mistake people make. Barbecue sauce is loaded with sugar and can burn before the meat is done. I serve it on the side, but if you want to put it on right at the end just to caramelize, that’s fine.”

Lack of seasoning
“You’ve got to season the food properly, which is why barbecue rubs are important. Mix salt, pepper, garlic powder, onion powder, a little thyme in a bowl. Taste it to make sure you have the ratio right, and you have a barbecue rub. That’s what you use instead of barbecue sauce.”

Rushing the process
“Grilling is all about patience. No matter what type of grill, it will cook much better if you let it warm up for 10 minutes. Depending on what you’re cooking, sometimes you want to let your meat sit on the counter for a half-hour to warm up. If you want to marinate things, it takes time.”

Guessing on doneness
“A good instant-read thermometer is so important for checking internal temperatures. You’re looking at this piece of meat and you don’t know what’s going on inside of it, so you’re not sure if it’s done or not. What do you do? Most people make the mistake of just cooking it a little more to be sure. Well, what you end up with is overcooked food.”