When it comes to serving the public and engendering goodwill, two FOP lodges have gone above and beyond. Indianapolis Lodge #86 and Kansas City Lodge #99, recognizing that one-on-one interactions build familiarity and trust, are reaching out with resources and individual connections — all to foster dialogue, educate and bridge divisions between police and the community.

In Indianapolis, the push is to #ThinkBigger, an initiative that focuses on education, prevention and community collaboration. #ThinkBigger came out of a high-profile, highly controversial incident in Indiana, says Rick Snyder, president of Indiana Lodge #86 in Indianapolis. Two officers — one white and the other biracial — were reinstated after the fatal shooting of Aaron Bailey, a black motorist who fled after being pulled over for a traffic stop.

A life was lost, regardless of who was right or wrong, Snyder notes. Typically, after a decision by a review panel or, in this case, a Police Merit Board, everyone goes their separate ways, he says. “We as a community needed to take a different approach from other communities around the country. Rather than keep rotating around the same tired discussion, we wanted something positive to come out of it. We have to think bigger. Instead of blaming each other, what are some of the root causes that led to the tragedy?” he asks. 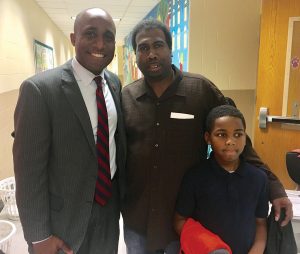 Education is a key component of the initiative, which got “immediate buy-in from our membership” and National FOP President Chuck Canterbury, who was “extremely supportive from the get-go,” Snyder says. The Indianapolis FOP and Indiana State FOP each contributed $25,000 to launch #ThinkBigger.

“The game-changer is that FOP is leading the way forward” and not waiting for others, such as the mayor or City Council, to do so, Snyder says.

As part of a strong public education campaign, FOP is considering creating instructional videos that explain “why officers do what they do.” For example, he says, people are surprised to learn that police cars pull up behind motorists, rather than in front of them during a traffic stop, because the situation “could be dangerous.” Approaching from behind gives officers “better reactionary time.”

Other videos could be about the do’s and don’ts of police interaction or how to behave during a traffic stop or an arrest. During a stop, Snyder says, motorists often don’t know that they should keep their hands on the steering wheel, where they are visible, and that police, on occasion, can order occupants of the car to get out. The public has to comply with lawful commands, he says, comparing it to “being in a courtroom and the bailiff orders everyone to rise when the judge enters.” 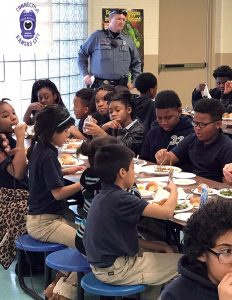 “The thing about the Aaron Bailey case is there were two people in the car, which provided a side-by-side comparison of the events that occurred,” Snyder notes. Bailey fled after being pulled over for a traffic stop. Then he crashed the car. “His passenger puts her hands up and left unharmed. Bailey didn’t and his actions led to fatal results,” Snyder says.

Ideally, he’d like the video to include perspectives from, say, the president of the NAACP about what people of color might fear, from the Mexican consulate speaking about the language barrier and from an officer, who’s as nervous as anyone else who’s been pulled over.

Reaching out to faith leaders

A second component of #ThinkBigger is leveraging the power of the pulpit to help educate the public to prevent unnecessary tragedies, Snyder says. He has held discussions with the Urban League, the NAACP race relations committee and at Indiana Black Expo about the #ThinkBigger initiative. And he is working on an FOP-hosted luncheon for 150 to 200 faith-based leaders scheduled for August 28, the 55th anniversary of Martin Luther King Jr.’s “I Have a Dream” speech. In that speech, Snyder points out, King didn’t talk about black and white people; instead he’d advocated for “God’s children together.”

Snyder has also reached out to the Reverend Markel Hutchins, the Atlanta civil rights advocate who founded the One Congregation One Precinct (OneCOP) initiative, which Snyder says was endorsed by National FOP in its Board meeting this spring.

“The goal is to utilize all houses of worship and multiple denominations to connect beat cops with congregational members and to develop strong relationships.”

#ThinkBigger also calls upon teachers, schools and the Bureau of Motor Vehicles to help educate drivers about safe practices during police encounters. But it’s the personal connection that Snyder emphasizes.

“I am big on talking to people who don’t like police very much,” he says. “I want to hear your truth about police/community interaction. I want to know where your heart is and where you’re coming from. And I want you to hear mine.

“I want people to say that they had a dialogue and sat close enough to smell each other’s coffee breaths,” he adds.

“What I keep finding is that [the public and police] agree on 90% of everything,” Snyder says. It’s perspective that affects the remaining 10%. Let’s “build trust and respect on the 90% we agree upon,”       he urges.

“We’re going to do this. Something is going to happen,” Snyder resolves, but it’s going to take everybody’s effort. “We can’t fix what’s happened in the past but we can fix what’s occurring today. And we’re saying, ‘Who wants to help with that?’” 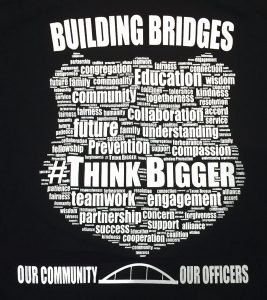 To launch its community outreach program last year, Missouri Lodge #99 in Kansas City started young and went to an elementary school in one of the city’s most violent neighborhoods. “Frequent, positive interactions with the police while children are still young is key to long-term systemic changes regarding the attitude between police and the public they serve,” says Lodge President Brad Lemon.

In partnership with Kansas City Public Schools, the Police Athletic League and Parents of Murdered Children, Lodge #99 began Connecting Kansas City at Wendell Phillips Elementary School to improve relationships with parents and establish positive relationships with students. “If parents have negative feelings about the police, chances are their children will as well,” Lemon says.

The program invited Wendell Phillips students and their families to a free, catered meal on the second and fourth Tuesday of every month during the school year. The dinner allowed FOP members, officers and civilians who work for the Kansas City Police Department to listen to residents’ concerns about police and their suggestions as to how to improve community relations.

After dinner, officers from the Police Athletic League took the children to the gym to play games. This helped familiarize children with the PAL program and law enforcement, while giving parents an opportunity to speak freely about their police or safety concerns.

More than a dozen volunteers from the FOP, Parents of Murdered Children and PAL participated in each dinner. “We entered into a formal agreement with Kansas City Public Schools to have the program at Wendell Phillips [last year],” Lemon notes. Connecting Kansas City will continue for the 2018–2019 term, although a school hadn’t been selected as of press time.

Crime and safety concerns weren’t the only issues addressed. The program connected parents “to resources available to them, including economic hardship funding, educational opportunities, food and clothing banks and more.” 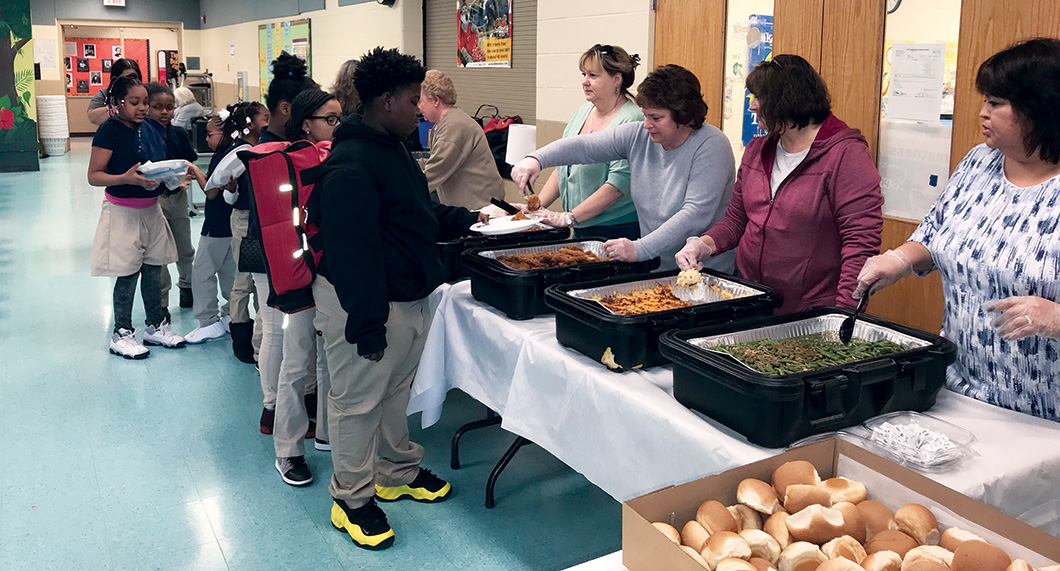 “We had more than 2,000 attendees at this year’s dinners and averaged about 150 people each event,” Lemon says. These numbers are particularly remarkable because transportation is a challenge for many families and parents work long and odd hours. Students in all grades and their family members attended.

Community interest also is strong. “We have had church leaders, city leaders, representatives from the Kansas City Chiefs and many more attend our dinners because they wanted to learn more about what we are doing,” Lemon says. 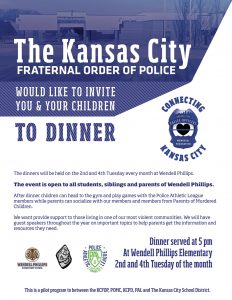 With the help of more than a dozen community organizations, nonprofits and a local community college, the program was able to provide numerous resources and tools to families. They included, Lemon says: 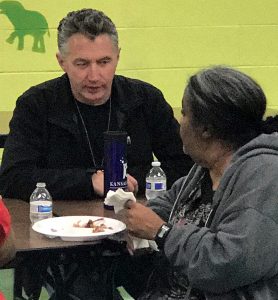 After dinner, family members were able to freely share concerns with police.

Funding for the outreach program came from a policing grant from Open Society Foundations, a philanthropic organization that works to build democracies whose governments are accountable to their citizens. “We thank Open Society for providing us the funding to make this program a reality,” Lemon says.

The Kansas City Police Officers Memorial Foundation administers the program. After media-driven events like Ferguson and other officer-involved shootings, the KC FOP Board saw a need to build trust, provide support and improve the relationship with those living in the urban core, Lemon says. Of the increasing tension between African Americans and police officers, he says, “There needs to be a conversation in this country about what’s going on. Without open, honest dialogue, things will only continue to deteriorate.”

Connecting Kansas City is a step forward. “If we don’t work to build a better relationship with the public we serve … we have failed as police officers,” Lemon says. “If the public doesn’t trust us to protect it, we can’t do the jobs we swore an oath to do. We have to do better as officers and as human beings to talk to one another and respect one another.”

What is your lodge doing to foster community connections and help others? Go to www.fopconnect.com/forms/we-ask-you-answer and let us know! Your story could be featured in a future issue.

See this story in the Fall 2018 FOP Journal issue.