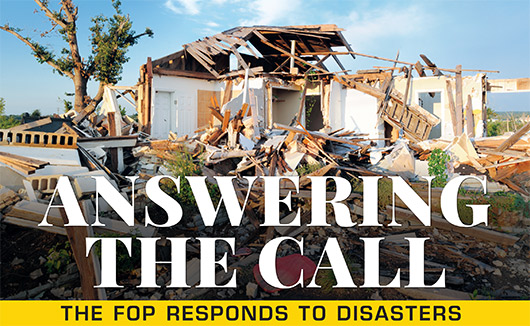 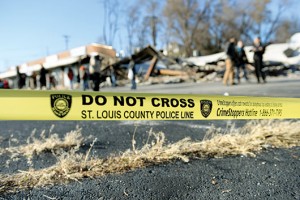 Joplin, Missouri, May 22, 2011: A deadly twister nearly a mile wide rips through the city and neighboring rural communities, pummeling houses, businesses, hospitals and farms. The catastrophic EF5 tornado ultimately kills 162 people, injures more than a thousand others and causes $2.8 billion in damage.

Ferguson, Missouri, August 9, 2014: Protestors and rioters take to the streets following a shooting of an African-American teenager by a law enforcement officer. Looting and violent unrest grip much of the city center, forcing police to establish curfews and deploy riot squads to maintain order. The riots erupt again in November after a court hearing. 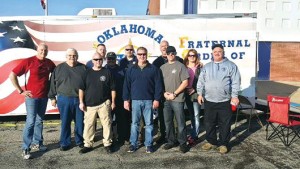 Oklahoma and Missouri FOP lodge members showed up to feed the officers working during the Ferguson protests.

On the surface, these two incidents may seem completely different; one is a weather-related disaster, the other a lesson in human behavior. Yet they both have a common thread weaving them together — FOP Disaster Relief volunteers were there to provide aid, food, shelter and someone to talk to when things got rough on the front lines.

“A lot of people think we’re just a labor organization,” says Missouri FOP State Lodge President Kevin Ahlbrand, a member of Lodge #68. “Incidents like these show our fraternal side.” 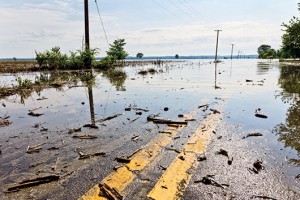 The National FOP Disaster Relief Committee is responsible for overseeing several aspects of disaster response, including responding to extreme weather events, providing aid and assistance during an event, and offering financial support to law enforcement officers and their families who have been affected by a disaster. The idea of the program is to help officers involved in disaster coverage feel the FOP has their back while they’re helping their community and may be unable to look after their own families and homes. 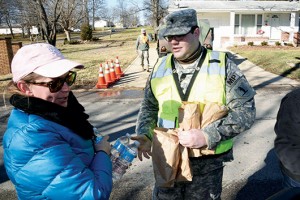 Missouri FOP volunteers responded after floods damaged or destroyed an estimated 7,100 structures in the St. Louis area during the winter of 2015–2016.

Sometimes, this includes donating money to help officers find shelter or repair their damaged houses through the FOP National Disaster Relief Fund. “What happens in some of these cases is that officers get displaced from their own homes,” explains Denis McCrary, National FOP Disaster Relief Committee Chair. “We get them money quick so they can get help. Sometimes it’s just a hotel or maybe a rental until their insurance will kick in.” 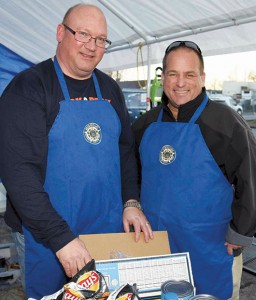 There is an application process for officers who want to be considered for these cash grants. The National FOP Disaster Relief Committee reviews the applications and determines assistance based on need, damage suffered and availability of funds. The National FOP Disaster Relief Fund has expended well over $1,200,000 since the 2005 Hurricane Katrina tragedy.

More often, the FOP’s involvement means a team of volunteers with a disaster relief trailer directly assisting officers who are in the throes of handling a large-scale emergency. That’s exactly what happened in both Joplin and Ferguson: Fellow law enforcement officers and FOP members from unaffected areas of the state showed up to lend a hand.

Ahlbrand first learned about disaster relief trailers when he helped out in Joplin after the 2011 tornado outbreak. The Oklahoma FOP disaster relief team, which had a trailer, volunteered to serve the first responders working in the devastated area. Seeing the immediate effect that the team with the trailer had on the situation — providing much-needed equipment and food to officers working long shifts in horrific circumstances — convinced him that Missouri needed to make a similar investment. 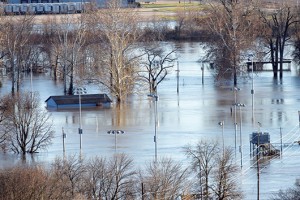 “I remember thinking, ‘Hey, we’re in Tornado Alley and flood places, too,’” says Ahlbrand. “‘We should probably get our own trailer.’”

Within the year, the Missouri FOP State Lodge joined the growing list of agencies adding disaster relief trailers to their arsenal. It came with a sizable price tag: Ahlbrand says the State Lodge has paid between $50,000 and $60,000 for the trailer and its increasing list of equipment. But the payoff has already been seen in two separate incidents where the disaster relief trailer was called out. 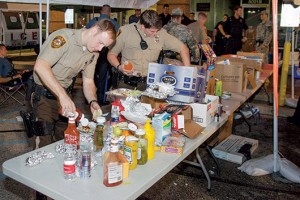 The first came in Ferguson, where officers were working 12-hour shifts for nearly two weeks and were relatively confined to the command post area. The detail was intense, and they faced a lot of anti-police sentiment. The disaster trailer stayed for 10 days and pulled another 10-day deployment during a court hearing held around Thanksgiving. FOP members from eight different states volunteered to man the trailer nearly 24 hours per day.

KNOWING WHEN TO DEPLOY 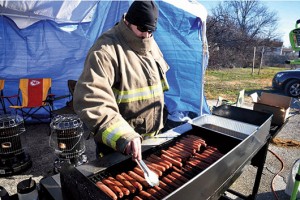 The second incident came just after Christmas 2015, when dozens of people died and thousands of homes were threatened as floodwaters spread across the greater St. Louis region. Floods are tricky; even though a police chief may assume the damage will be great, it still takes a lot of parameters to line up for the FOP and other agencies in charge of disaster relief trailers to deploy them.

“When a disaster or event happens, we have to make a decision because it’s a pretty big labor-intensive deal to deploy that trailer,” Ahlbrand says. “Since most of our members work full-time and we rely on them to volunteer to staff it, it can be hard to find people who can get away.”

Ahlbrand says the Missouri FOP disaster relief trailer will be deployed if it’s headed to a prolonged event (at least a week) and officers are confined to a particular area or among fixed posts. The state keeps its trailer in Jefferson City, which is about in the middle of the state, so that it’s relatively easy to get to any location in Missouri.

HOT FOOD AND SOMEONE TO TALK TO 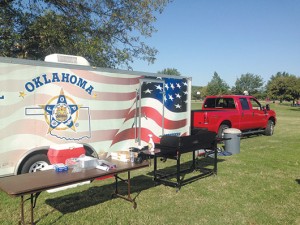 It may be hard for people not involved in law enforcement to understand the relief a hot meal and a chance to chat with someone not on duty (in the typical fashion) can bring to a first responder working a disaster. That is not lost on volunteers like Ahlbrand, though. He sees firsthand the benefit these disaster trailers provide.

“When we deliver them hot food and a hot drink or soda, our reward is seeing the gratification on their faces,” he says. “It sounds simplistic, but it really does mean a lot.”

Helping officers so that they can more effectively serve their communities in times of dire need: That’s what the FOP does. When a disaster strikes, everyone answers the call. 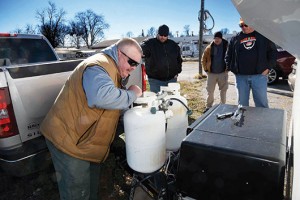 In order to better plan for and be ready to respond to disasters, the National FOP Disaster Relief Committee is attempting to prepare an inventory of available resources within the FOP State Lodges and local lodges across the nation. The goal is to have a centralized list of lodges that have established a disaster relief protocol and a record of their equipment, trailers and supplies. Here’s the current list:

If you would like your state or lodge’s trailer to be added to the list, please contact National FOP Disaster Relief Team Chair Denis McCrary at dmccraryfop@aol.com.

Editor’s note: Click here for more information on how to start a disaster relief trailer program in your state or local lodge.