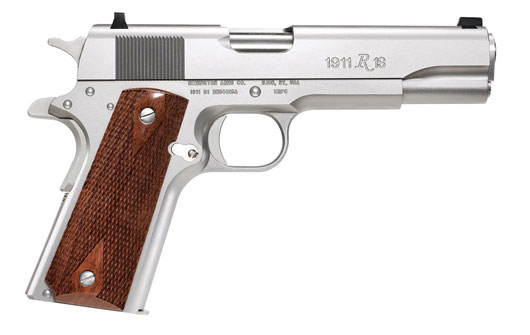 Condition One and Only

It’s hard to mention the 1911 without conjuring up images of perhaps its greatest advocate, Jeff Cooper. While today’s maximized .45s feature double-stack magazines and the choice of single  or double action — making much of Cooper’s lessons obsolete — I would be remiss if I did not revisit a favorite Jeff Cooperism. Besides, Cooperisms are great fodder for water cooler discussions.

Unless you are one of the unfortunates who are forced to wear a decorative pistol with an unloaded magazine [which is unlikely to be members of the FOP], there are three possible conditions in which to carry your 1911.

Condition Three: Chamber empty, hammer down. This requires you to manually cycle the slide before firing. To return the gun to its carry position after firing, you have to drop the magazine, empty the chamber, drop the hammer, reload and reinsert the magazine, all without shooting an innocent bystander. Condition Three is the slowest into action of any method of carrying a 1911 and, as such, is a dangerous concession to those whose nervous systems are conditioned to revolvers whose hammers are always at rest when not in use and which are not equipped with the operator-controlled safety systems of the 1911.

Condition Two: Chamber loaded, hammer down. This requires you to cock the hammer with your thumb before firing. It also requires you to very carefully pull the trigger and lower the hammer over a loaded chamber before returning the gun to its holster. The technique for manipulating a Condition Two carry is best practiced out in the country in a freshly plowed field, where the bullets will not ricochet off the pavement or the occasional rock every time you re-holster your gun.

Condition One: Cocked and locked. Chamber loaded, hammer cocked, thumb safety on. This requires you to snick the safety down before firing and snick it back up when you’re finished. Simple. And as safe as any mechanical safety can possibly make a gun, which is to say as safe as is consistent with practical readiness. Condition One is the fastest way to get your 1911 into action, the least prone to mistakes and therefore the only way to go.

None other than ingenious gunsmith John Moses Browning designed the venerable M1911. The 1911 served as the workhorse for several conflicts, including WWI, WWII, Korea, Vietnam and others. Likewise, it has ridden the hip of thousands of law enforcement officers around the globe.

The Browning design was first, and most popularly, produced by Colt. The Colt Model 1911 certainly holds the title as one of the most copied firearm designs of all time. Whether all or in part, nearly every contemporary semi-automatic pistol is based on the principles of John Moses’ design. Today, the 1911 is produced by several manufacturers, either as a direct copy or with modern updates that ensure the .45 will retain its royal status. Here is a look at a few next-generation .45s.

The Sig Sauer Scorpion 1911 is the flagship offering in a new series of pistols that will include the P220, P226 and P229. While 1911 designs certainly aren’t new to Sig, the Scorpion does bring a few new innovations, including Hogue’s Piranha custom grips with integral extended magazine well, matching mainspring housing a flat trigger and Cerakote finish.

The Pro CDPII has a 4-inch barrel and full-length grip and weighs a mere 28 ounces. The Custom CDPII is a full-size 1911. Even with the 5-inch barrel, it tips the scales at a scant 31 ounces. Chambering for both models includes .45 ACP and 9 mm.

The 1911 is certainly America’s favorite semi-automatic pistol. The U.S. military started officially making the switch to the Beretta a few decades ago, but I can personally attest to the grand ol’ four-five seeing action as late as Desert Storm. Without taking anything away from the Beretta, it may never capture the hearts and souls of American shooters the way the 1911 has.

Little is known about Remington’s history with the 1911, but during WWI Remington was contracted to produce the 1911 for the Doughboys. The production line saw 20,000-plus before the end of “The War to End All Wars,” when Remington stopped production.

To celebrate the 1911 becoming a centurion, Remington introduced the R1 in 2011. The R1 has added a few modern features, while still hanging on to the classic look and lines of its predecessor. The R1 incorporates the traditional short guide rod, sleek grip safety tang, checkered walnut grips and a familiar feel to the thumb safety.

The R1 is a beautiful piece and wonderful tribute to a historical firearm. While the low serial numbers and those with historical significance have already been scooped up and placed deep in collectors’ safes, there are plenty left for those who want to burn some powder — as the .45 should.

Do you own and/or carry one of the next-generation .45s mentioned here? If so, share your thoughts on it below.

I carried a SIG 220 for a number of years and it is still my favorite duty weapon for uniform and plainclothes carry. I had carried a Glock 17 & 19 and Sig 226 before carrying the P-220 in .45. The grip on the 220 fit my hand better than any handgun I’ve been authrized to carry on duty. I shoot it better than anything else I’ve carried on duty. My department no longer purchases .45 ammo so I had the option of buying my own pratice and duty ammo (pratice and qual ammo had to be lead free) or switching to .40 Glock. I like the Glock fine, but the P-220 will always be my favorite authorized duty handgun.

I own a Colt Series 80 Government Model. Best shooting pistol I have eber fired.