Fundamentals are fundamentals and not much has changed over the past century. Circa 1904, the U.S. Army’s shooting manual clearly stated, “Before any practice on the range is commenced, at least a month of dry-fire practice is required.” That was a solid policy then and it should be an absolute today. So why are rounds going off target? Simple: The program is sound but the execution is lacking.

As an LEO, you are by default a professional gun handler — just ask an opposing attorney. Although you regularly qualify, you must also realize that range qualification is a validation of the ability to meet a minimum standard, not a certification of competency. Even if you had to qualify before every shift, you would not necessarily improve. You would reinforce certain habits — some good, others bad — while improving muscle memory, but that would not necessarily improve the number of hits or reduce group size. For that, you need a coach or observer.

The Army’s solution was focused on the rifle range, but whether you are wielding a Colt LE6920 or your favorite Glock, the program is a good guide. The Army started by breaking shooters into two-person teams. With a peer coaching approach, both members gain the benefit of increased trigger time and another person’s perspective.

While shooting, your subconscious should be completely focused on the feel of the grip and trigger through recoil; your conscious mind should be focused on the front sight (as has been beaten into our heads) and the primary threat, as well as the secondary, tertiary and so forth. However, while in the coaching slot, you have the opportunity to check your partner’s form, stance, muzzle sweep, grip, follow-through, etc. Then, relate that to the shooter — and your own shooting form, training and dry-fire practice. You can often learn more about your own shooting by looking critically at someone else’s form.

The Army drill goes something like this. First, set up as many clean targets as will fit on your backer. Your first groups should be dry-fire and move to slow fire from there. At normal handgun ranges, naked eyes are fine; with a rifle at 25 meters, cheap binoculars will suffice.

With standard three-shot groups at 25 meters, a .25-inch group equals one MOA at 100 meters. With a pistol, your groups will be self-evident and should be limited to the critical zones. As soon as a target gets too many holes to discern the group, change it. Ultimately, targets are cheaper than a few rounds. 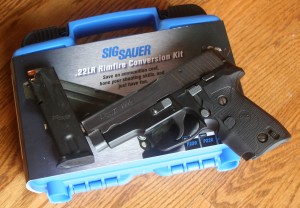 Manufacturers now offer small-caliber conversion kits for many popular models. These are great due to the fact that you get the same grip and trigger while increasing your practice time. Don’t forget to include plenty of dry-fire practice as well.

Once both shooters believe they are ready, hang a target with quad zones or four separate targets. The Army starts with the shooter aimed and gives 18 seconds to engage all targets. I would modify this. While we are not quick-draw artists — trying to do so can lead to dangerous situations — I would recommend starting from a low ready. Once the threat is presented (pop-up or rotating target) or the signal is given, engage all targets in a specified time.

With ever-shrinking budgets — both at home and the department — avid shooters have started looking for low-cost alternatives. While these alternatives have drawbacks on the grand scale, they can offer significant benefits for trigger time. 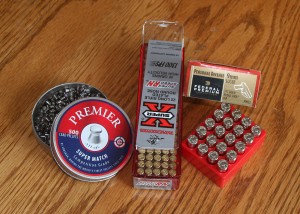 Pick your poison, from full-jolt 147-grain Hydra-Shoks to .177 pellets. What you shoot is not as important as whether or not you shoot. The advantage of shooting small caliber over dry fire is the group you print on paper. This can be useful to training and break up the boredom of dry-fire practice.

First, semi-auto handguns and AR manufacturers have stepped up and offer conversion kits to convert your duty weapon to a .22 or smaller. While the recoil is significantly different, the weight and feel are the same.

I would probably shy away from “.22-caliber clones.” While it is tempting to go this route and simply buy a scaled-down version of your duty weapon (Ruger’s SR 22 versus the SR 9), it’s just not the same. The whole point is to marry the muscle memory to the trigger.

Check with the manufacturer of your duty weapon. Sig Sauer, Glock and S&W all make .22 conversions for popular duty models. ARs are so modular that you have a couple of options. First, you can buy a second upper in .22 caliber and throw away all the furniture you would normally dress your primary with. 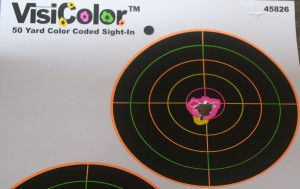 Admittedly, this was my best small-caliber group of the day — 10 shots from a low ready. Ultimately, in a gunfight it won’t be about the size of your practice groups but the successful deployment of the skills you’ve built.

The second option is a bit more radical, but don’t discount it without a fair look. Crosman (yes, the air gun company) introduced its MAR177 at the 2012 SHOT Show. The MAR177 fits on your AR lower and is weighted to feel like a standard AR. Because you are shooting your duty AR lower, you will be using the same trigger. This opens up options for training.

When performing dry-fire practice, you are going to feel a similar recoil due to the short burst of air. Second, you can practice indoors either dry or with the aid of an inexpensive pellet trap. Small-caliber alternatives are not perfect solutions for the real world, but if they get your finger on trigger more often and have the potential to see the results on paper, I’m all for them.

Do you practice shooting with a partner? Ever used one of a small-caliber alternative? Share your thoughts below.