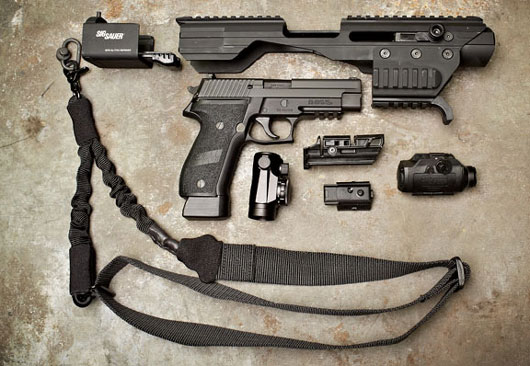 SIG SAUER’s Adaptive Carbine Platform (ACP) offers serious possibilities and one potential fatal flaw that could keep it from becoming a mainstream accessory, even for law enforcement. The ACP isn’t the first platform capable of converting a pistol to a carbine, but according to SIG it is the first with the ability to do it with multiple weapon platforms.

SIG’s ACP is offered in three flavors — the standard ACP is just a frame and a Quick Disconnect sling mount (you supply the sling). For about $125 more, you can step up to the Enhanced model, which adds a detachable bungee sling and SIG’s red dot sight — the sight alone is a $200 value.

Version 3 is the law enforcement version, which for $30 more than the standard version includes a folding shoulder stock. Cool as it is, the stock has been ruled against by the ATF, which classified it as a short barreled rifle (SBR), which means a Form 1, $200 tax stamp fee and six or so months’ wait to get permission to use it.

While the ACP will accept a host of different pistols, you’d need to reregister and pay the transfer tax for each. In addition, if you ever decide to sell the pistol, you would have to first write the ATF to have it delisted as an SBR, otherwise the buyer would have to transfer it using a Form 4 and pay the $200 tax. That pretty effectively kills the folding stock option.

What the ACP Isn’t

The ACP is not a firearm. For lack of a better explanation, it is the case your pistol is strapped in. Despite its name, it isn’t a carbine either. Because it is a pistol holder, you do not have a longer barrel and thus the increased accuracy and muzzle velocity of a carbine.

Unfortunately, as much as I like SIG and have carried one for close to 20 years, it is not as adaptive as the marketing may leave you to believe. Yes, it will work with several different pistols, but it is a shot in the dark as to which ones. Most all of the full-size SIGs work great, but Internet chatter has been loaded with other models that did not work or work well with the ACP. Even if the pistol fits, there is the question of whether or not you will be able to manipulate the controls — slide release, safety, etc.

While I have not fully reviewed the ACP, I do have one major concern, which has the potential to be the fatal flaw. Typically, clearing a malfunction would require a standard “tap and rack.” The ACP uses a charging handle that is less than 1 inch long. This makes it difficult to get more than a couple of fingers on it. For a malfunction, you would have to “tap and operate the charging handle.” Modern CQB doctrine has the operator manipulating the charging handle of an AR with the palm of the handle and charging handles have swollen in size to accommodate this technique. I just don’t know how well the small handle would work in a pressure situation with hostiles …

SIG is selling the ACP in record numbers, so I cannot say it is in any way a dud. Plus, there isn’t a rash of trolls on the Net bashing it, which bodes well for the platform. So, if you have a few extra Benjamins burning a hole in your pocket and you are a gadget-head looking for the latest upgrade, the SIG SAUER ACP is worth a look and a trip to the range. Just be sure to make sure it is compatible with your pistol and all its controls first.

Have you used SIG SAUER’s ACP? Did you experience any difficulties clearing malfunctions? Leave a comment below!