Small add-ons can make a big difference — for or against you.

The modular nature of the AR, or modern sporting rifle (MSR), has made it one of the most flexible firearms ever developed. The platform has been modified for tactical, sporting, target and hunting applications. With a simple change of the upper receiver, the MSR can be converted from a close-quarters battle (CQB) carbine to a long-range rifle in seconds — in just about any caliber you can dream up.

The ultimate use — or desired mod for that particular day — and personal preference determine the best accessories, but here are a few for the perfect build.

Ideally, you would begin with a barrel length of 16 inches. Sixteen inches is sufficient to gain the necessary performance and accuracy, but short enough to still be used for CQB. Models with a 14.5-inch barrel are also popular and would achieve much the same performance, but often come with legal issues for non-law enforcement (family, resale) and cost more. 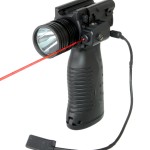 The great thing about the MSR is you can apply or remove gear as necessary. Lights are a popular accessory and invaluable under the right circumstances — the rest of the time they’re just dead weight. Either way, when picking a model spend a few extra bucks and make sure the bulb was designed to withstand the shock of repeated recoil. The light also needs to be bright, free of dark spots and include a pressure-activated switch. Check out the Surefire Millennium or Sig Sauer Stoplite.

The mere mention of Sig’s Stoplite brings up the debate over whether or not to use a vertical grip (VG). VGs look cool and work for some. Others, especially when shooting in a stress situation, tend to pull back on the VG. This causes them to start spraying rounds. 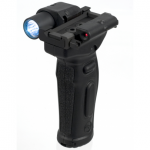 If you are going to run a VG and a light, you may as well go all out with a laser. As any experienced shooter knows, lasers are far from an accuracy-enhancing tool, but they can be intimidating. Several laser fans have mounted and used lasers for hunting at night. This can be effective (where legal) for hogs and varmints, but so will a decent red dot sight at a fraction of the price. Still, if this combo is what you are looking for, check out Crimson Trace’s MVF-515 — a bright white light and red or green laser. 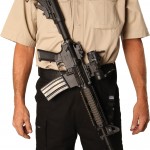 Slings are one of the most underrated accessories you can put on an AR. First, they offer a hands-free carry solution, which can be vital in a host of scenarios. Second, they’re great for weapon retention. After that, and depending on the situation, they can be used for secondary applications such as lashing gear and emergency tourniquets or to assist in dragging a game animal out of the woods. The BLACKHAWK! Universal Tactical Sling is cheap, easy and effective. 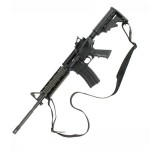 Rail covers on an MSR serve multiple functions. Damaged rails require some serious filing to remount items and can destroy your battle sight zero. Rails are also sharp (if shooting without gloves) and under heavy firing conditions can get hot. For $25 to $50, you can avoid all of this and protect the rails, which are rather pricey in the first place. As an added benefit, with a palm-up grip you’ll be more comfortable and drive the gun faster from one target to the next. Rails also tend to force the elbow down naturally. Magpul offers low-profile, enhanced and ladder rail panels that can be cut to custom lengths to work around your accessories.