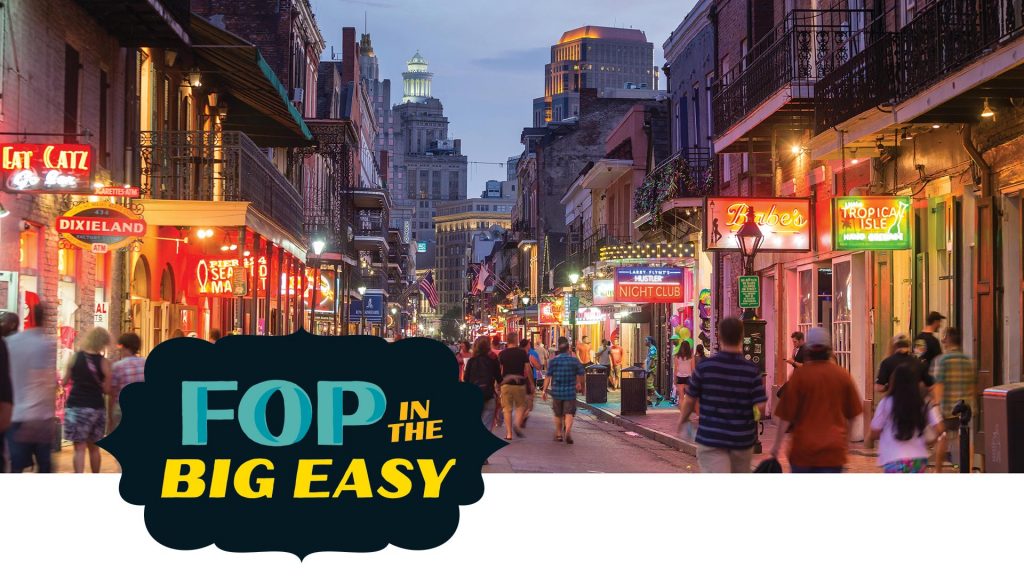 Your Guide on Where to Eat, Relax and Have Fun at the National Conference

It’s been 14 years since the Fraternal Order of Police held its biennial National Conference in New Orleans. A few weeks after that event wrapped in 2005, Hurricane Katrina blew through, flooding the famed Louisiana city. Now, after years of rebuilding, the Big Easy has gotten its swag back and is ready to welcome FOP members and their families this summer to the 64th National Conference and Exposition.

“A lot of people don’t know it, but the fleur-de-lis was designed as a symbol of rebirth, and that’s what we look like. New Orleans has changed and gotten better,” says Darrell Basco, president of the Louisiana State Lodge, host of the August 12–15 conference at the New Orleans Ernest N. Morial Convention Center.

Established 300 years ago as a trading camp on the Mississippi River, New Orleans has become an internationally acclaimed destination. Every winter, millions of revelers descend on the city to celebrate Mardi Gras; however, there are plenty of reasons to visit any time of year, including all kinds of festivals, big and small.

Indeed, stroll down any street of the famed French Quarter and you’ll likely hear the playful tunes of a brass band. Or maybe the jubilant sounds of a funeral procession winding its way toward one of the city’s iconic aboveground cemeteries. Even in the middle of the day, one can hear jazz notes floating through open club doors, often accompanied by aromas wafting from a melting pot of restaurants. After all, music and food are intrinsically associated with the Big Easy.

“Even some of our lodge-sponsored events are based on the music of New Orleans and the tastes of Louisiana,” Basco says.

To make the most of your stay, here’s a sampling of what to eat, see and do when traveling to the Conference.

New Orleans is known for serving up original flavor profiles at legendary restaurants, and top among them is Commander’s Palace. In addition to receiving seven prestigious accolades from the James Beard Foundation, the Garden District business was named No. 1 in four categories, including turtle soup, by New Orleans Magazine.

The city’s proximity to the Gulf of Mexico makes seafood a staple for many eateries, such as GW Fins, which prints out a new menu every afternoon based on the freshest catch of the day.

If you’re in the mood for a more casual experience, head over to Mother’s Restaurant in the Central Business District for an authentic po’boy sandwich and bowl of jambalaya. Be sure to scan the mementos displayed on the restaurant’s military wall.

In a hurry? Grab a Dat Dog, a popular local favorite. You can try crawfish étouffée, the Son of a Saint Dog with alligator sausage, or improvise by choosing among 30 toppings.

New Orleans is also home to beignets, a fried pastry usually partnered with a strong cup of coffee. Pralines are another local indulgence. Aunt Sally’s has been cooking up the nutty, caramel candy from the same recipe for multiple generations.

Serious foodies can sign up for a New Orleans Culinary History Tour. Historians guide visitors through unique regional tastes and tales at some of the oldest restaurants.

While the city offers a full menu of delicious food finds, mixologists pour out some eclectic spirits. The Sazerac, for example, may be an old-school cocktail but it remains popular, especially at the Sazerac Bar in the famed Roosevelt New Orleans, a Waldorf Astoria hotel.

Want to kick back at a neighborhood joint? Pop into the French Quarter’s Longway Tavern or its sibling Barrel Proof. Just outside the Quarter, you’ll find Meauxbar, which highlights French influences in food and drink concoctions.

Although Mulate’s is considered “The Original Cajun Restaurant,” it’s also a great place in the Arts District to experience the musical culture of Cajun country.

Or enjoy a relaxing evening at the Cuban Crafter’s Cigar Lounge, where rooms are available for private parties. Feeling competitive? Challenge friends to a game of 10-pin at Mid City Lanes Rock ’n’ Bowl, which showcases live music nearly every week.

Activities for All Ages

Beyond food and nightlife, New Orleans also offers plenty of activities that appeal to all ages.

Cruise the Mississippi River on the new Riverboat Louis Armstrong, docked only a few blocks from the convention center. The Satchmo deck is dedicated to the legendary musician, who played on steamers traveling the river before he was old enough to land gigs at clubs in town.

On land, families can play around in Audubon Park, part of the Audubon Nature Institute. Gather for a picnic near the lagoon or playgrounds, or work up a sweat on the tennis courts, along its nearly 2-mile jogging path or on the links of the Audubon Golf Club.

The family also will enjoy the Audubon Zoo, where children can get hands-on with multiple animal encounters and botanical life. At the Audubon Aquarium, visitors can walk through the Great Maya Reef, observe penguin antics and touch sting rays.

For a truly Louisiana outing, take the family to the Insta-Gator Alligator Ranch. Between mid-August and early September, more than 1,000 alligators hatch there, and guests can watch the process unfold in their own hands.

Explore the beauty of the bayou and delta with The Great Delta Tours, which highlights fisheries and natural habitats, Use promo code “FOP” for discounted tickets. You can even paddle around the waterways on your own with a rental from Kayak-iti-yat.

New Orleans offers visitors a collection of museums. Wander around the sculptures on the grounds of the New Orleans Museum of Art before viewing the galleries inside.

Veterans, officers, family members and history buffs will appreciate the National World War II Museum’s extensive exhibits, enhanced with more than 9,000 personal accounts from veterans who served in all branches and on all fronts.

Travel River Road back to the 19th century. Stop at Destrehan Plantation for guided tours of the historic home and gardens. At Whitney Plantation, learn how the indigo and sugar economy affected enslaved peoples. Meanwhile, the Laura Plantation presents the Créole woman’s perspective with firsthand stories.

Retail sites abound, from the French Market District — home to more than 40 boutique shops and 200 daily vendors at the farmers and flea markets — to neighborhood shops.

Still looking to experience more of New Orleans’ charm? Basco suggests asking local residents for suggestions: “They’ll give you great advice about great places. You won’t have to look too far.”